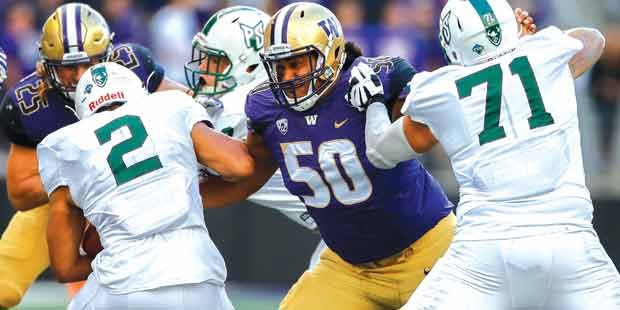 In our second look into the various mock drafts, pundits differ as to which direction the Chargers will go after finishing second in the AFC West with a 9–7 record. With needs at the DT, LB, OL and QB positions, some believe General Manager Tom Telesco will address the defense in the early rounds after the rush defense finished last season ranked No. 31 out of 32 teams.

Here is a glance from a few mock drafts and a quote from the analysts regarding the players they believe could be donning a Chargers uniform in 2018.

“The Chargers had the second-worst run defense in the NFL this season. Vea is the anchor in the middle this defense has lacked since the days of Jamal Williams. The 6-foot-5, 340-pound Pac-12 defensive player of the year might be the strongest prospect in the entire draft class and would have likely been a first-round selection had he left school a year ago.”

Vea ranks No. 29 overall by Scouts Inc., No. 10 overall on ESPN Draft Analyst Todd McShay’s top 32 prospects list and the No. 1 DT on McShay’s position rankings.

“The co-Big 12 defensive player of the year was also named first-team All-Big 12, second-team All-American and a semifinalist for the 2017 Butkus Award recognizing the nation’s best linebacker.”

Jefferson ranks No. 46 overall by Scouts Inc., and the No. 7 OLB on McShay’s position rankings.

“The best nose tackle in this class is Payne, who was a monster in the College Football Playoff, even if he didn’t always show up on the stat sheet. Georgia couldn’t block him in the national title game. The Chargers are set with good, young pass-rushers, but they could upgrade on Brandon Mebane, who’s signed for only another year. Payne would strengthen the belly of a defense that ranked last in the league in rushing yards per attempt allowed (4.9).”

Kiper ranks Payne No. 17 overall on his big board. “Payne (6-2, 319) is a reliable presence for the Crimson Tide, and he might have had his best two games in the College Football Playoff. Georgia couldn’t block him, especially in the first quarter. Payne isn’t going to put up huge numbers on the stat sheet — he has only three career sacks — but he consistently beats interior offensive linemen and gets good push, and he’s a solid prospect with some upside.”

Payne ranks No. 42 overall by Scouts Inc., No. 18 overall on McShay’s top 32 prospects list and the No. 2 DT in McShay’s position rankings.

“James was made to play in Gus Bradley’s defenses. He’s a more explosive version of Kam Chancellor.

James ranks No. 6 overall by Scouts Inc., No. 11 on McShay’s top 32 prospects list and the No. 2 safety on McShay’s position rankings.

“The Chargers’ offensive line rebuild took a step in the right direction last season, but there’s still more work to do. Brown brings a physical run-blocker and capable pass-protector to Los Angeles. He finished ninth overall among the nation’s tackles at 87.9, and his 88.1 run-blocking grade ranked fourth.”

Brown ranks No. 25 overall by Scouts Inc., No. 13 on McShay’s top 32 prospects list and the No. 1 OT on McShay’s position rankings.

The Endzone: With Philip Rivers entering the final two years of the contract extension he signed in 2015, the Chargers need to draft a quarterback for the future. Aside from ESPN’s draft analyst Todd McShay, who has the Chargers selecting Oklahoma QB Baker Mayfield at No. 19 in his first mock, many believe if Telesco takes a QB it will be in the later rounds. ESPN’s Eric D. Williams says it is likely the Chargers take a quarterback, just not on day three of the draft.

“Philip Rivers turns 37 in December and is signed through the 2019 season. General Manager Tom Telesco hasn’t drafted a quarterback since 2013, and the Chargers need to start developing a succession plan once Rivers is no longer on the team. Telesco said he likes how developmental prospect Cardale Jones improved during practice reps in his first season with the Chargers. However, Telesco needs to add more young talent for competition among this position group.”

McShay put out his first mock before the regular season ended and the raft slots were determined.

“Orlando Brown is an option at offensive tackle here (No. 19), but this is a good time for the Chargers to take a successor for the 36-year-old Philip Rivers. Los Angeles passed on Patrick Mahomes and Deshaun Watson last draft, but Mayfield is too intriguing to pass on here. Perhaps no other prospect has improved his stock more in 2017 than Mayfield, who was my ninth-ranked QB coming into the season, with a mid-round grade. The Heisman winner is an exceptional leader and could play himself into the first round with a good showing in the college football playoff.”

Mayfield is ranked No. 28 overall by Scouts Inc., No. 19 overall on McShay’s top 32 prospects list and the No. 4 QB on McShay’s position rankings.