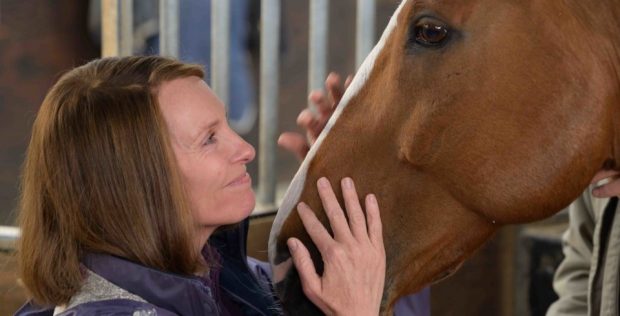 Coming to theatres and then On Demand From writer/director John Gatins and Bleeker Street comes a story of surprise, a community together and a DREAM HORSE.

Jan Vokes (Toni Collette) lives in a small Welsh town where everybody knows everybody. Getting up and going to work at the market and then at the local pub, Jan is feeling the itch to do something more with her life. That’s when she gets the idea to buy a mare and breed a race horse.

Husband Brian “Daisy” (Owen Teale) cannot believe what his wife could be thinking but finds himself building a stable in their back yard. Knowing it is going to take a flow of money to make this happen, Jan enlists the help of Howard Davies (Damian Lewis) who has some experience with horses.

Calling a town meeting, Jan explains her plan and soon discovers that there is excitement brewing and many want to be included. Now comes the hard part, finding a mare and finding the right horse to breed her with. As things begin to fall into place – a foal is born, and the town is abuzz. The group comes together and names their spirted young foal Dream Alliance.

Now it is time for the alliance to see what their faith and money have brought them. It is time to race until Dream finds himself and his alliance at the Welsh Grand Nationals.

Collette as Jan is perfect for this role in that she has the ability to make her role look easy. Pushed by life and a strong belief in something better for everyone, Collette gives her character the same feistiness as the foal she is truly fond of.

Lewis as Davies is a man who has a history, both good and not so good, with horse racing. Not so sure about Jan from the beginning, Lewis gives his character a second chance to make things right with the choices he has made in his life and making good on a past mistake with his family. Lewis also gets the opportunity to play a role that is not as intense as his HOMELAND and BILLIONS character and it is nice to see.

Vokes as Owen is a man who has been letting the television tell him about the world around him. Once Dream comes into their lives, he finds that passion for life can be found in a smelly stable – and he is happy about it. Trying to support his wife and do right by the townspeople is where his difficulties lie.

The townsfolk and family round out the rest of the cast and provide laughs, smiles and a sense of community so thank you goes to Nicholas Farrell as Phillip Hobbs, Sian Phillips as Maureen, Karl Johnson as Kerby, Peter Davison as Lord Avery, Steffan Rhodri as Gerwyn, Anthony O’Donnell as Maldwyn, Alex Jordan as Johnson White, Max Hutchinson as James Lingsford, Lynda Baron as Elsie, Asheq Akhtar as Peter, and Darren Evans as Goose.

Bleeker Street is a New York City film company that has brought outstanding films to the public. Their library includes TRUMBO, DENIAL, THE LOST CITY OF Z, BEIRUT, HOTEL MUMBAI, ORDINARY LOVE and THE ROADS NOT TAKEN. For more information on the titles from Bleeker Street please visit www.bleeckerstreetmedia.com.

DREAM HORSE has many facets to it for a wide-ranging audience. First, it is a story based on the life of Dream Alliance and the history of his races. There were many other races than the ones shown in the film and he did exceedingly well and retired in 2012 to a life of leisure.

The film is also the story of a Welsh community who came together for something that gave them all great joy and excitement. There is something to be said for that, especially in times where a community can feel apart and disconnected.

Finally, it is the story of a woman who did something unique and saw it through till the end. She didn’t hesitate to make decisions and made it perfectly clear that her objective was to protect Dream at all costs. Standing up for herself brought others around her to do the very same and that is everything.

So gather the family to watch a story that is filled with determination, love, friendship and understanding for both the two legged and four legged creatures of the earth and enjoy DREAM HORSE.

In the end – hearts will race!