Dunford picked to be next Marine Corps commandant 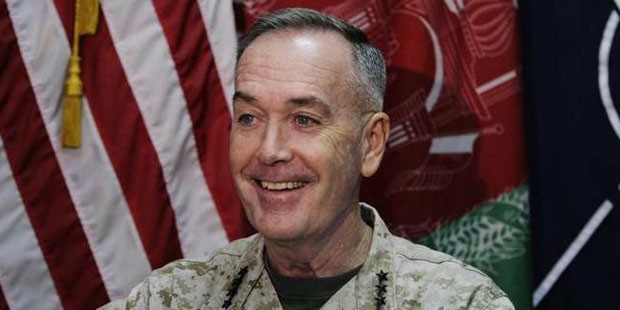 Marine Gen. Joseph “Fighting Joe” Dunford has been nominated as the next commandant of the Marine Corps.

The Defense Department announced today that Defense Secretary Chuck Hagel had nominated Dunford, who currently commands coalition troops in Afghanistan as head of the International Security Assistance Force, to be the 36th commandant.

“I’m humbled to be nominated as the 36th Commandant of the Marine Corps,” Dunford said in an emailed statement from ISAF headquarters in Kabul, Afghanistan.

Dunford, 58, previously served as the 32nd assistant commandant of the Marine Corps under Gen. Jim Amos from 2010 to 2012.

During his 37-year Marine Corps career as an infantry officer, Dunford has spent considerable time in both post-9/11 combat theaters.

He commanded the 5th Marine Regimental Combat Team during the 2003 invasion of Iraq, where he earned his “Fighting Joe” nickname, spending nearly two years in that theater in various roles over the duration of the war.

Since Dunford took command of ISAF and United States Forces-Afghanistan in 2012, he has overseen the shuttering of hundreds of bases and the drawdown of thousands of coalition troops as the war draws to a close.

During his tenure in Afghanistan, Dunford has made a habit of releasing condolence statements to the people of Afghanistan following humanitarian tragedies and enemy attacks, and offering good wishes during observances such as the religious feast of Eid.

Last year Dunford told Congress that he believed it was possible to win in Afghanistan, defining victory as the creation of strong and sustainable Afghan forces and a stable civil government. He has called for a force of 8,000-12,000 coalition forces to remain in Afghanistan after the end of this year, which is in keeping with the plan for a 10,000-strong contingency force that president Barack Obama recently announced.

While Dunford has avoided stirring controversy on some of the pressing legal and political issues, he did help to oversee the launch of integrated infantry training for female Marine officers during his time as assistant commandant, in keeping with a mandate from the secretary of Defense. He also worked to ensure alcohol-abuse treatment for Marines charged with DUIs and issued orders cracking down on hazing and targeting “high-risk behavior” in Marine units in order to shore up unit cohesion.

“Joe is one of the most knowledgeable and talented leaders and thinkers in the military today. He has commanded and excelled at every level,” Amos said. “His tenure as commander of [ISAF] and U.S. Forces – Afghanistan over the past 18 months has been extraordinary, and is testament to the full measure of the man.”

Retired Gen. Charles Krulak, 31st commandant of the Marine Corps, said Dunford’s infantry experience would balance well with his executive experience in Washington, dating back to the 1990s when, as a lieutenant colonel, he served as an aide to then-commandant Gen. Carl. Mundy.

“I think that the Marine Corps from the youngest private to the oldest general are going to be cheering his selection and in support of it all the way,” said retired Gen. Charles Krulak, 31st commandant of the Marine Corps. “His professionalism and his character and his values were built long ago.”

Retired Sgt. Maj. Carlton Kent, who served as the 16th sergeant major of the Marine Corps, said Dunford would prioritize Marines and their families and excel in relating to troops in all ranks.

“He’s the damn epitome of a Marine leader,” Kent said.

Dunford’s nomination must still be confirmed by the Senate during a hearing process expected to take place later this year. If he is confirmed, he will likely be installed as the next commandant this fall.