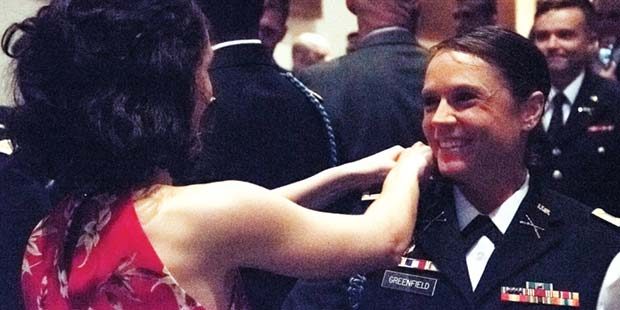 SACRAMENTO — For 1st Lt. Leslie R. Greenfield, crossing the finish line is something that has literally been a huge part of her life. As an avid runner who has successfully completed 10 marathons including the Boston, she knows what it is like to train hard and to remain focused in order to complete a race.

On July 20, however, Greenfield crossed a different finish line: She became the first woman in the California Army National Guard to graduate from Infantry Basic Officer Leadership Course (IBOLC).

“This is very exciting for me and I am so happy to have had the opportunity just to attend IBOLC,” said Greenfield during a recent telephone interview from Fort Benning, Georgia, the home of IBOLC. “There were days, I have to admit, that I questioned myself, but I kept moving forward to reach my goal to graduate.”

Only 38 women have graduated from the course since the Army opened all combat arms related occupations to women a few years ago. Greenfield was one of six females from class 04-18’s 141 graduates to earn their blue cord. She knew that she would encounter some adversity from those who do not necessarily believe women belong in the infantry.

“Some men believe you should not be here,” she explained. “You know you have to work to earn their respect more than just a guy coming in right off the street.”

Coming to that decision involved asking those who had some insight into the infantry world. For that, Greenfield looked to fellow officers and to a number of non-commissioned officers within her CST.

“I have been blessed with so many great mentors and talking to them about what to expect was my saving grace,” she said.

One such mentor was Sgt. 1st Class Justin Flood. Greenfield praises Flood for taking the time to explain what to expect. He also helped her improve in her marksmanship, taught her about what it takes to be an infantry leader and to speak words of confidence to inspire her to never quit.

“The infantry is not for everyone, male or female,” Flood said. “She (Greenfield) has the drive, and I knew early that she would be that person who would take on that challenge.”

Flood further explained that Greenfield did one specific thing that he said would ultimately lead to her success.

“She is not afraid to say I am not familiar with this, and I need some advice,” Flood said. “I think all good leaders who ask for advice especially when they are not sure, will succeed.”

Greenfield will begin her journey as an infantry officer as a platoon leader, Charlie Company, 185th Infantry Regiment.

“While monumental, graduating from IBOLC was a baby-step for the LT,” Flood said. “Now comes the next test, and I have full confidence Lt. Greenfield will clear the next hurdle on her way to becoming an outstanding officer.”