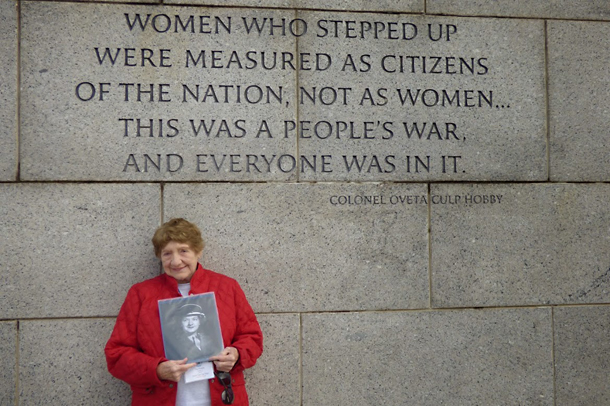 Seventy-eight WWII vets returned to a fabulous Homecoming in San Diego at Lindbergh Field on Sunday, October 5, 2014. The WWII vets were returning from the nation’s capital.

Honor Flight San Diego, a non-profit military service organization, has been flying San Diego-based WWII vets to Washington, D.C., for the last four years. Along with their family and friends who were on board for assistance, the elderly military veterans visited a slew of war memorials in one long weekend, October 3 –5, 2014, including the WWII Memorial.

In a recent interview with The Siegel Sidebar, Dave Smith, 63, the Honor Flight San Diego Hub Coordinator, shared why he became an activist. “It took the second generation to understand that our parents had not been recognized for their service to this country,” Smith said. “After I went on an Honor Flight trip in 2010 with my own dad, I knew that I had to become involved.”

There was no local program before Dave Smith stepped up to the plate. Taking on the fund-raising for Honor Flight San Diego “was just the kind of thing my son could and would do,” said his dad, Arthur Smith, 91, who served in the U. S. Marine Corps during WWII.

Five female WWII vets were on the October 2014 flight and WWII Marine veteran, Peg Peasley, 96, was one of them.  Upon her return, on a quiet afternoon, she, and her daughter, former U.S. Air Force Lieutenant Dori Jaffee, 66, visited exclusively with the Siegel Sidebar.

“After the war ended, I went on with my life. I never saw myself as a hero,” commented Peasley.

“At my age, I did not think I could handle that whirlwind schedule. So I told her to forget it.” But, Jaffee persuaded Peasley to apply and Peg is glad that she did. “Something kicked in. I felt energized,” she said after
returning.

When she got off the plane, the former schoolteacher and airline reservationist could not believe it. Scout troops and the Knights of Columbus, as well as just regular folk, lined the runway. This unexpected greeting overwhelmed Peg. “It was for all for us, we all felt so special,” she beamed.

Linda Dudik, and Linda Laurie, both working independently in the community to preserve WWII memories before they are lost forever, were on the flight, too. “The Homecoming is a surprise,” said Laurie. “You really must come the next time and see what happens.”

Valerie Jaffee, 27, a Duke University student studying public policy, drove six hours from North Carolina to D.C. to share that Saturday with her grandmother as she toured the memorials. “I am still on my cloud though I spent two days sleeping when I came back,” admitted Peasley, with a characteristic twinkle.

“I had been to Washington, D.C. before but I never saw it the way I saw it with these vets,” said Jaffee, whose father and Peg’s husband, Harold Peasley, was an U. S. Air Force Colonel.  “It was a source of pride and joy.”

If you would like to help Dave Smith put another group of surviving WWII seniors in the air, or if you know a WWII veteran who has not taken this trip yet, or, you, yourself, would like to go as a guardian, please contact him at dave@honorflightsandiego.org.

Editor’s Note: Both Linda Dudik and Linda Laurie, mentioned in this article, will be featured in their own interviews with The Siegel Sidebar in future editions of THE MILITARY PRESS.

Heather Siegel is a well-known disability rights advocate. Each story brings Siegel’s unique insights into the complex lives of disabled veterans struggling to survive in the peacetime world. If you know someone who would be a good candidate for a profile, please contact Heather Siegel — The Siegel Sidebar at siegelsidebar@militarypress.com or (760) 432-8383.