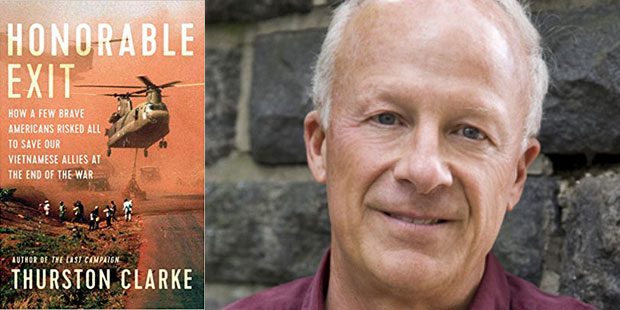 “Honorable Exit” by Thurston Clarke delves into the facts behind the evacuation of the South Vietnamese people. Many Democrats have shown their disgust with President Trump over his stance on illegal immigrants and refugees. Yet, these same Democrats blocked Vietnamese refugees, including orphans, when millions were trying to escape South Vietnam as it fell to the communists. In reading this book, people can see the true meaning of the word amnesty as well as the hypocrisy of the Democrats.

In 1975, about 130,000 South Vietnamese were evacuated either on transport planes or were picked up by the American Navy. They eventually ended up in refugee camps where all but 10,000 were on their way to becoming American citizens. But those Americans who helped with the rescue were thwarted by many at home. The book tells how “President Ford had asked Congress for $250 million in humanitarian funds necessary for the evacuation of Americans, and between 150,000 and 200, 000 Vietnamese.” A few days later Secretary of State Henry Kissinger insisted that the “United States had an obligation to evacuate its South Vietnamese allies.” Yet, Congress resisted such help.

Vice President Joe Biden, while Senator, was one of the Democratic hypocrites. He helped to seal the fate for many U.S. allies by cutting off U.S. support for those battling the communists. In an op-ed, published by the Washington Post, Quang X. Pham, who was born in Saigon and later served as a Marine pilot in the Persian Gulf War, criticized Biden, “(He) charged that the (Ford) Administration had not informed Congress adequately about the number of refugees — as if anyone actually knew during the chaotic evacuation.”

But even worse was then-Gov. Jerry Brown, who did not want the Vietnamese refugees settling in California. He stated, “We can’t be looking 5,000 miles away and at the same time neglecting people who live here.” Brown even attempted to prevent planes carrying refugees from landing at Travis Air Force Base near Sacramento.

Clarke explains how many Vietnamese were left behind during the chaos. Some of those left behind suffered severely. The North Vietnamese soldiers attacked thousands of helpless civilian refugees that included young women, elderly citizens and children.

Because many honorable Americans took the initiative, they were able to save many. These heroic Americans in the CIA, U.S. military, and other agencies tried to help the South Vietnamese evacuate.

For example, Colonel William LeGro, a military intelligence officer, stated, “Let’s ignore the embassy and organize our own evacuation.” People were safely led to planes, helicopters, and boats by the “underground railroads.” They risked their careers and life by disobeying orders, dodging bullets, forging papers, concealing identities, even pledging personally to sponsor evacuees.

The book shows an iconic photograph of a helicopter airlifting the South Vietnamese who climbed a staircase to get to safety. Thurston noted, “Regarding that famous photo, everything I assumed was wrong. It was not on the roof of the American Embassy and was not an American helicopter. The people rescued were all Vietnamese after the stairway and rooftop were prepared secretly by American Marines and the Air American people. The staircase was very elaborate, wide, and sturdy. It was one of thirteen roofs that were prepared without the approval of the American Ambassador. The Americans that helped construct these staircases, and performed the airlift, put themselves at risk. For example, the pilot in that famous photo, Bob Caron, told how earlier, while trying to rescue others from different rooftops, had his Huey helicopter take a bullet in the drive shaft.”

What Clarke wants Americans to understand today, “I put in this quote, ‘This impulse to save the Vietnamese was an act of conscience as well as a gesture of contempt for Capitol Hill.’ Many righteous Americans believed that evacuating Vietnamese who faced retribution under a Communist government represented a last chance to accomplish something noble at the end of an ignoble war. The American rescuers had an attitude that they were going to evacuate everyone who wants to go and that they will not leave until everyone who wanted to get out would. They refused to abandon the South Vietnamese allies and looked upon Congress bitterly because they would not even consider providing assistance.”

It is ironic how those same people today bad mouth Donald Trump. Maybe they need a reality check by looking in the mirror.