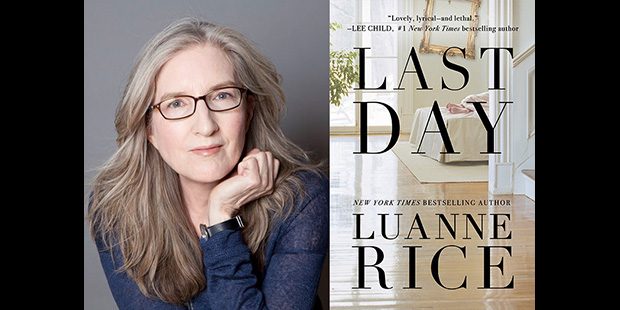 Last Day by Luanne Rice is a gripping psychological suspense story.  It starts out with an intensity from page one that never lets up.  The story delves into survivors of trauma, sisterhood, best friends, and small communities shaken by violence or death.

“One of the characters, Kate, came to me as I realized her sister would be murdered. I based it on a murder my family had to deal with in the 1980s. A woman was killed by her husband.  My husband at the time was a witness as well as my stepdaughter who helped convict the man.  My family thought the husband could not do it since they were on a boat when the body was discovered. Before they left for the boat trip, they heard her husband call to her and ask her to telephone him if she did not feel well, since she was pregnant.  However, my step daughter pointed out she had picked up the extension and that he was talking to a ringing phone.  This story in the book has a lot of emotional truth and some details.”

The plot begins with the brutal murder of Beth Lathrop who was six months pregnant. She is found by her sister Kate, strangled in her bed with her skull bashed. Kate also notices that a famous painting, “Moonlight,” is missing. This brings back another trauma suffered by Kate, Beth, and her mother. Twenty-three years earlier as teenagers, they and their mother spent 22 hours tied up in the basement of the family gallery. All three were gagged, and the mother suffocated as a result. Although the girls survived they suffered emotional trauma, especially Kate. Beth was able to move on, throwing herself fully into the art world, running the family gallery, and raising a beautiful daughter, now sixteen years old, with her husband Pete. Kate, instead, retreated into herself and took to the skies as a pilot, always on the run.

The author describes her main characters: Scotty is troubled, judgmental, jealous, and emotionally abusive with some rage. Lulu has a bone deep comfort friendship with Beth and Kate.  She kept incredible secrets from Kate that were told to her by Beth.  She is protective and loving.  I think she shows how a group can be close, but also there are different dynamics between individuals. Kate idolized her sister and was very protective of her.  Steady, stable, guarded, and feels free in the sky while flying.  I think outwardly she is an adventurous person, while inwardly she is scared and has built defenses.  Inwardly she is fragile.  Her grandmother influenced her greatly.  She was Kate’s savior with her strength and fortitude.  She taught Kate to follow her heart and beliefs.  Beth took a lot of risks, a lot more than Kate.  I think she is emotionally strong and brave.  Elegant, refined, able to move on from the trauma.  Pete is a creep.  Someone outwardly charming and superficially handsome.  To some he is likeable and lovely, but behind closed doors he is a master manipulator and an emotionally abusive liar.  He does exactly what he wants to do without regard for other’s feelings.  Basically, a con man who played on Beth’s emotions.  He sometimes had complete rage.

The police investigator assigned to the case, Conor Reid was the same one who worked the past case. He swore to protect the girls and is ridden with guilt that one of them was brutally murdered.  Kate also decides to investigate and to find out what happened to her sister.  While in the course of searching for answers she discovers secrets about Beth. It seems that the two sisters had the same best friends, Lulu and Scotty, throughout their life, and that Beth confided in them more than Kate.

The story will hold a reader’s interest from page one.  They will take a journey with the characters as they learn about each other and try to find out why Beth was murdered.