Fashion and The Hollywood Connection

If you are a fan of my blog(s) you may have noticed that I have written about celebrities and fashion, well it’s happened again. Talented actress Gina Gershon and screen icon Raquel Welch are just two of the actresses starring in the Lifetime Original Movie “House of Versace”, chronicling Donatella Versace’s (Gershon) inspiring triumph over tragedy by carrying on her brother’s powerful legacy after his 1997 slaying.

The movie is based on Wall Street Journal reporter Deborah Ball’s widely-read book “House of Versace: The Untold Story of Genius, Murder, and Survival.” The movie brings to light the story of Donatella, who, following the surprising murder of her brother, world-renowned designer Gianni Versace (Colantoni) at the height of his success, is suddenly thrust into the spotlight as head designer of his fashion empire. With the daunting task of taking over the worldwide fashion house, Donatella was ridiculed at first by critics worldwide and soon fell victim to drug addiction and nearly bankrupts the company. With the aid of her family, including daughter Allegra, Aunt Lucia, (played by Welch), she enters rehab to confront her demons and soon comes back stronger than ever to re-ignite the beloved Versace brand with her own vision and builds one of the most powerful and influential fashion houses ever known.

Lifetime also aired the hour-long documentary, “Versace: Beyond the Headlines”, providing an in-depth look at Gianni Versace’s journey in the fashion industry and ultimate creation of the multi-million dollar fashion empire that lives on after his death. The special will include interviews with people who knew Gianni, fashion designers, as well as a police detective and criminologist who explain their take on his tragic murder in front of his Miami mansion on July 15, 1997.

Elsewhere in fashion: New York and Company has also just partnered with the lovely actress Eva Mendes to give us the “Eva Mendes Collection” featuring clothes and accessories. For more information on that line, visit www.nyandcompany.com 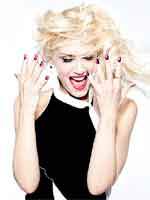 Gwen Stefani collaborates with OPI to create a signature collection of nail polishes. Mrs. Stefani is “known for her trademark red lips, bold eye makeup and nail art, she uses beauty to accessorize her style.”

The signature shade of her seven-piece collection is “Over & Over A-Gwen,” a red polish inspired by her signature lipcolor. Others shades will include “Push and Shove,” a chrome hue, and the glitter shade “In True Stefani Fashion.” And for nail art addicts, there’s a box set with black and silver Swarovski crystals and metallic studs in a variety of shapes.

Jackie Thomas is a proud Navy Veteran. She has represented designers from Project Runway, Project Runway All Stars, All On The Line, etc. She produces celebrity fashion shows all across the country and abroad. She’s also a Guest Speaker for FIDM (Fashion Institute of Design & Merchandising) in San Diego.