Two paintings hanging in entrances at Naval Hospital Camp Pendleton and the Corpsman Field Training Center on base will be featured on the set of the TV show “Army Wives” this spring.

“Wings of Hope” and “Hidden Wings,” battlefield paintings by Point Loma artist Todd Krasovetz, are slated to appear in episode 7 of the upcoming sixth season of Lifetime’s series, which follows the lives of several Army wives and their families on a military base.

The paintings show Navy corpsmen tending to wounded comrades in the field in what “Army Wives” set decorator Missy Ricker called a perfect fit for the set.

Ricker found the pieces on two websites, militaryartposters.com and official-military-art.com, while combing the Internet for art to hang on the walls of the scenes in a doctor’s office and conference room in the show’s Mercer Medical Hospital. 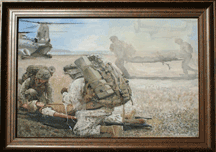 Ricker zeroed in on Krasovetz’s work following director John Kretchmer’s request for military art that spoke to the fact that the doctor in the show was a lieutenant colonel and medic in the Army.

The director wanted an image that was striking and symbolized the strength, brotherhood and patriotism that exists in medical hospitals, Krasovetz said.

“The things we ‘dress’ onto the set can make the whole storyline a little deeper by giving viewers insight into the characters,” Ricker said. “Todd is able to capture the reality of life on the battlefield, while adding a hopeful, spiritual element … celebrating the role of the medic in action,” she said. 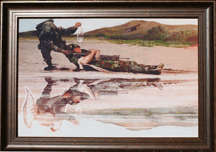 "Wings" of Hope by Todd Krasovetz

Krasovetz received a call from the studio’s attorney last month asking about purchasing his paintings. “I was blown away,” said Krasovetz, who sold the studio hand-painted prints of his originals.

Krasovetz, 41, has been painting professionally for two decades and specializes in military art, with works on exhibit at the Marine Corps Recruit Depot San Diego, Cannon Air Force Base in New Mexico, San Diego Veterans Museum, William Beaumont Army Medical Center in El Paso, Texas, and Walter Reed Military Medical Center at Bethesda, Maryland, where his commissioned piece “Corpsman Up” is slated to go on display this year.

He was commissioned by the Naval Hospital Camp Pendleton to paint “Wings of Hope” in 2001, the first of seven military installations he has completed over the last decade; four more are in the works, including one for the new hospital at Camp Pendleton.
Krasovetz started painting military subjects as a tribute to service members and their families.

“I want the families of wounded veterans to feel appreciated,” said Krasovetz, whose painting “New American Pride,” hangs in the waiting room of the hospital’s emergency department.

A major influence on Krasovetz’s military art is his brother, Scott Krasovetz, a retired a Navy corpsman who served two deployments with the 1st Marine Division based at Camp Pendleton.

His brother and comrade Matt Murphy, with whom he was deployed in Iraq became subjects Krasovetz used to paint “Wings of Hope.” As a corpsman, Scott Krasovetz administered aide in the field to Murphy, ultimately saving his life, which is reflected in the angel wings on the corpsman in the painting, “My paintings are not your typical military art,” Krasovetz said.” I use angelic images and there’s a spiritual side. Just because war is hell, doesn’t mean there isn’t an angel in the field.”