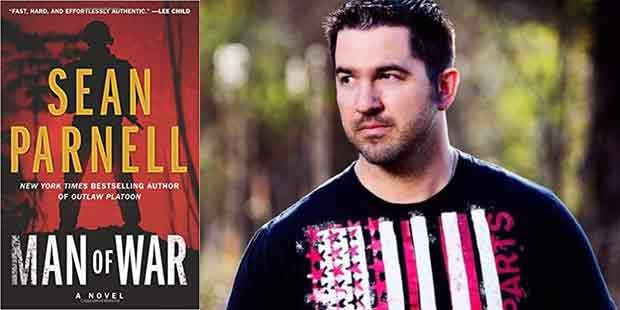 “Man of War” by Sean Parnell is an exciting and action-packed thriller. He is able to draw upon his past experiences as a combat veteran to create a realistic storyline. It is a warning of sorts on what could happen if a terrorist is able to get his hands on a nuclear bomb.

Parnell is a retired army infantry officer who served in Afghanistan. After receiving a medical retirement, he wrote his memoir, “Outlaw Platoon,” recounting the battles he and his troops participated in. Now, Parnell has turned to fiction and has done a very good job with this first novel. A book quote, “In combat there is no prize for second place,” and with this debut it appears he will take on all comers with a gripping plot.

He also uses military terminology and acronyms. It is obvious Parnell is able to use his own experiences when it comes to the military and how Special Forces operators walk, talk and handle themselves on and off the battlefield. The battle scenes are intense and authentic.

Readers are introduced to Eric Steele, a tough-as-nails combat veteran who becomes part of a clandestine organization, known as “The Program” that answers only to the president of the U.S. Operators combine their combat experiences with actionable intelligence to root out and neutralize the enemy. This allows the commander-in-chief a third option instead of diplomacy and a lengthy war. Steele’s former mentor, Nathaniel West, has become his adversary, after going rogue and stealing a suitcase nuke to get revenge on the United States. His journey takes him all over the world, from Algiers to Europe to America. Steele is assisted with thwarting this deadly threat by Meg Harden, a CIA analyst, his co-worker/buddy, Demo, and the vice president. But he is also thwarted by a president dying of cancer and a traitor within the national security apparatus.

This novel has it all: conspiracies, larger than life characters, with a good dose of intrigue, deceit, power and treason. Anyone who wants a book where patriotism looms large will enjoy this story.

Elise Cooper: How did you come up with the idea of the covert organization, The Program?

Sean Parnell: The inspiration came from my time in the army. We felt like we had our hands tied. For example, we knew the location of a high value target, but could not go out and capture him. It took three days to get approval from someone 3,000 miles away in Washington, D.C.

By that time, he was tipped off and escaped. I thought if only there was a Special Forces unit that is clandestine, without bureaucratic red tape that could go after the enemy without any rules to tie their hands. Thus, The Program was born.

EC: How would you describe your main protagonist, Eric Steele?

SP: A selfless American warrior with of a code of honor. He understands we are still in the fight against the terrorists. I wanted him to have the ethos of our nation’s warfighters, lethal but also compassionate. Those two traits make Eric Steele who he is. Yes, he destroys America’s enemies with extreme prejudice, but he will deviate from the mission if he thinks he can save even one innocent life. He sees America as a shining city on the hill. A true believer who wants to protect, save, and defend his fellow citizens.

EC: How would you describe his nemesis, Nathaniel West?

SP: He is a former Alpha who everyone thought was killed in an explosion. He is taking the fight to America because he felt let down by his superiors and those in Washington since no one came to rescue him or his family. West is hell bent on revenge on those who left him there. He is a guy wronged by his country. He was betrayed and lost everything while fighting for his country.

SP: I actually have one I love, especially the look and history. It is awesome, reliable, and a tried/true weapon. I know the Marines used it in WWII as the commissioned weapon. I think it was used from WWI through the Vietnam War as a standard issue sidearm.

EC: You have a scene where Hezbollah destroys everything?

SP: These terrorist factions destroy everything they touch, such as beautiful places like Lebanon. They do not care about anything else except religious fundamentalism. They are set on destroying the U.S. as well.

SP: Some of it is made up and some isn’t. I think this brings a certain level of authenticity. I wanted to have a balance. I did not want to go that much in depth but wanted to make sure readers got a taste of it. For example, I explained “in the zone,” “data pins” and “mad minute.”

EC: How would you describe the supporting character, Meg?

SP: A woman in a man’s world. The perpetual underdog that always is underestimated. She can hold her own under most circumstances and gets really upset when people try to treat her like a China doll. She enjoys being in the fight and earning things on her own.

EC: Are you influenced by any of the well-known thriller authors?

SP: Vince Flynn influenced me tremendously. I would read his stories while fighting in Afghanistan and think how cool it would be to create a world like this. I also have a shout out to Brad Taylor in the book. He is awesome. I will be putting other authors in the different books I write.