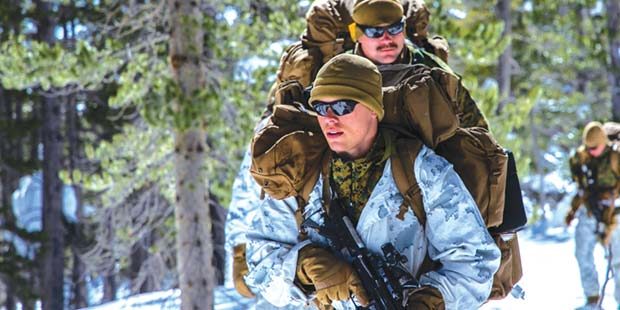 Established in 1951 as the Cold Weather Battalion, MWTC is one of the Corps’ most remote and isolated posts that provide cold-weather training for personnel who are bound for deployments and further training around the world. With its base camp nestled at 6,700 feet above sea level, and training areas rising above 11,000 feet, MWTC is the premier location for this specialized training.

Both battalions, who are stationed at Marine Corps Base Camp Lejeune, N.C., received a 12-day crash course on acclimatization, lessons on moving in the snow, and keeping warm.

They put what they learned to the test by summiting and surviving atop the 12,000-foot mountain.

The units focused on three mission essential tasks: survival, mobility and combat. During the physically demanding exercise each Marine’s issued main-pack weighed up to 103 pounds.

“We’re all east-coast Marines,” said Blunt, a squad leader with Company C, 1st Battalion, 6th Marine Regiment, 2nd Marine Division. “Being out here puts us out of our element, only in great ways.”

We’re learning the basics all over again, but this time in a mountainous environment, he said.  “Right now, we’re at 8,500 feet. Other platoons, like our snipers, have gone significantly higher.”

Hutchison said this type of cold-weather package is an invaluable lesson for the Marines.

“On the most basic level, the Marines are hardened to a degree that they’ve never been hardened before,” Hutchison said. “When you look at the Marines and talk to them after the exercise, you see confidence, a confidence in their ability to overcome any type of environmental or physical challenge.”

“This is a place that makes Marines strong,” Hutchison said.