Meltzer dives into nonfiction with ‘The First Conspiracy’ 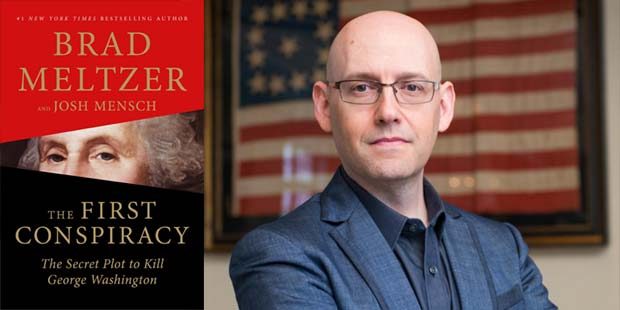 “The First Conspiracy” by Brad Meltzer brings to life a spy thriller that actually happened. This non-fiction historical mystery delves into a plot to assassinate General George Washington, exposing the spies, killers, counterfeiters and traitors and how those in the still forming government addressed the plot.

This is Meltzer’s first non-fiction book, written with writer and documentary producer Josh Mensch. It tells of a hidden event that took place during the most critical period of America’s birth. The heart of the book takes place after Washington’s arrival into New York City in early 1776. After having to flee to a British ship docked in New York’s harbor, the Governor of New York, a Loyalist, William Tryon devises a treacherous plan to kill the US General. He enlists the help of the city’s mayor, David Mathews, and some in the civilian population that have divided loyalties and shifting allegiances. All are willing to sacrifice their devotion to the highest bidder.

Shocked by these rumors Washington decides to assemble an elite band of soldiers, the Life Guards, to protect him. In addition, he along with another Founding Father John Jay, established the secret Committee of Intestine Enemies, designed to uncover the traitors, learn their plans, and stop them. The clandestine operations showed how Jay regarded the importance of counter-intelligence, and the Life Guards can be considered the precursor to the Secret Service.

Although a non-fiction story it reads like a spy novel with a sense of immediacy and peril. Readers will be astonished that this “First Conspiracy,” was but a footnote in American history until now, when the authors bring it to the forefront.

Elise Cooper: How did you find out about the story?

Brad Meltzer: I discovered the story a decade ago. I wondered if the secret plot to kill George Washington was real or nonsense. After looking into it I found it was true and was blown away by it. I even went to the Pulitzer Prize winning historian Joseph Ellis who knew of the story. He told me it was “A true mystery that very few Americans know,” and that it might be tricky to research. This is an amazing rabbit hole to jump down.

EC: Why not write it as a fictional thriller?

BM: I did use it in one of my thrillers, “The President’s Shadow.” There is a page where I mentioned the exact plot. But, I wanted to do more with this incredible story. After five years it was still in my brain so I knew I had to write a book about it. Usually I would take some real detail and expand on it. But this was all real and so very fascinating.

EC: You also break some of the myths about the early years of the Revolutionary War?

BM: The myth says we were a ragtag army who held hands and came together to defeat the powerful English. But in fact, we were not unified, but acted just like today. For example, our Massachusetts regiment hated our Connecticut regiment who hated our Virginia regiment. They were all different with dissimilar beliefs and customs, including wearing different uniforms. I show this in an amazing scene in the book. Someone from the Virginia regiment meets someone from the Massachusetts regiment who starts to make fun of the Virginia uniform. A fight breaks out until George Washington rides on his horse and picks them up, emphasizing the need for a team. If ever there was a metaphor for where we are as a culture there it was. He helped build the United States by holding us together. The book delves into getting rid of the myth that we were all together and shows how hard fought it was to get us together.

EC: Do you think Washington’s leadership helped bring us together?

BM: He knew if there was no discipline there was going to be problems. He wanted the men not to gamble, drink, or fight amongst each other. Just look at the Battle of Brooklyn where we got our butts kicked. The British outfought us, had better training, and better experience. What Washington did was adapt. In the middle of the night he plotted that daring escape on the East River. He refused to get into any boat until all the troops were rescued. I think that was one of the defining moments where we came together.

EC: How would you describe Washington?

BM: He never gave up. The one word that exemplifies him: honor, honor, honor. He had integrity, humility, and would put others before himself. What we are missing today is a leader who finds more of what we had in common than what separates us, something Washington did best. He is a doer who had a depth of character.

EC: How would you describe John Jay?

BM: He created a secret organization within our government that came out of the plot to kill Washington. He is an incredible investigator who did interrogations to collect information. He actually built a counter-intelligence operation by using civilians to ferret out information about the traitors. He built an entire system for the government to protect itself. I call him the original American bad ass.

EC: How would you describe the British General William Tryon?

BM: He is an evildoer. As a villain, he could come out of any of my thrillers. There is a scene in the book where he and Washington enter New York at the same time. All the people were cheering Washington and not him.

BM: Leadership, loyalty, and the harm betrayal does. It is summed up in the final sentence of the book, “In our lowest moments we always find our greatest strengths.”

BM: It was about a year ago. What is very special to me is that he wrote about our first President, while he was our oldest living President. He wrote, “A wonderful book about leadership-and it shows why George Washington and his moral lessons are just as vital today. What a book. You’ll love it.” This is a book about everything President Bush did, including counter-intelligence since he was also the CIA Director. I considered him a dear friend.