Michael Davis is out to prove himself 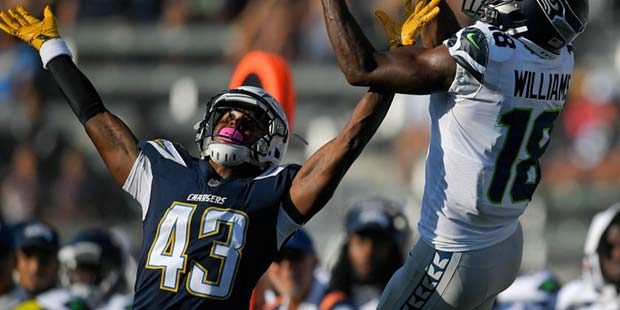 Over the years the Chargers have been very successful in signing undrafted players who not only had a major impact on the team but also on the entire NFL — see Antonio Gates. One such player hoping to make a lasting impression is cornerback Michael Davis. Signed as an undrafted free agent in 2017, Davis spent his rookie season as a special teams performer with limited snaps (37) on defense.

In an effort to get more physical, Davis spent the offseason taking wrestling lessons to improve his tackling skills, which paid off when he was promoted to the starting lineup in week nine against the Seahawks. As he prepared to face the Arizona Cardinals last week, Davis answered a few questions from MP reporter Art Garcia Jr.

Art Garcia Jr: With three starts under your belt, how do you feel about your performance so far?

Michael Davis: I think I’m doing pretty well. As you know, I’ve done a lot of work to improve myself particularly in my eyes, and in my eyes, I have grown a lot from last year (as a special teams player) to this year when I became a starter.

AG: I know you busted your hump over the offseason by taking wrestling classes to improve your tackling skills. How satisfying was it when the coach promoted you to the starting line up?

AG: What has been the biggest adjustment, if any, you had to make in going from a special teams performer and backup cornerback to now lining up as a starter?

AG: With the Chargers now located in L.A., they are your home team having grown up in Glendale. What was it like to hear your name called over the loudspeaker in front of your “home crowd” so to speak?

MD: The only one thing that was going through my mind was, “Damn, I made it!” That’s the only thing, it’s like well, now that I’m here I might as well make the most of it. It’s like when I hear my name called I’m living life right now. I honestly feel like I have the best job in the world right now. I get to go to battle with my brothers every week, I practice with them every week and we get to come out and show the world what we can do on Sundays.

AG: Take me back to draft day. What did your agent tell you and did you expect to be drafted?

I had several teams calling me saying I was going to be a top four or top five (cornerback), but I didn’t have a very good senior year in college. I was trying to be optimistic but at the same time, as you know, you can’t run away from the truth. So after the draft ended I got a few calls from different teams, and one was the Chargers who said they thought I could do well with them.

So I called my agent and asked what he thought, and he said he talked to the Chargers too and he thought it would be a good spot for me, saying I could grow with them and he thought I could be a starter in the near future. So I said, “Let’s do it,” and playing for the Chargers is like playing right in my backyard here in L.A.

AG: Did your agent mention to you how many undrafted players have had long, successful careers after signing with the Chargers?

AG: Aside from yourself and Addae, the secondary has two other undrafted players in Trevor Williams and Adrian Phillips who have started a few games as well. I hear guys are pretty close friends on and off the field, tell me about the bond between you all?

MD: Yeah, as an undrafted player you play for all the undrafted players. So I feel you should gravitate towards those players, and we’re all buddies, we all hang out and stuff like that. I feel a special connection with undrafted players because we know what we’ve been through and we know the process we have to go through. I feel that this year we’ve become much closer — a lot closer than we were last year.

AG: With that being said, what is it like to be a player “on the bubble?” As ecstatic as you were making the team last year it had to be really hard when the team waived you during the first week of the season?

MD: I was distraught. I really don’t like to talk about it because it was a bad moment in my life where I was kind of like, “Oh crap, can I play in this league? Am I talented enough?” I felt like crap where maybe I wasn’t good enough to play in the NFL, but then I called my mom and she remained optimistic and told me to just keep putting in my best effort. And the next day the Chargers signed me to the practice squad and I worked my butt off on special teams in particular and following the second week I was activated and played special teams for the rest of the year. So it all comes down to hard work and I know that I’m a hard worker.

The Endzone: Raised in a single-parent household, Davis said his mom was his biggest influence growing up and credits her for instilling in him the belief and self-confidence that he had the talent to play in the NFL. Davis has a son, Atticus Crowe, who helps keep his priorities in check where realizes everything he does, positively or negatively, effects his son and he is determined to provide the same kind of positive influence his mother had on him growing up.

When asked what advice he would give people about not giving up on their dreams if at first, they don’t succeed at something, Davis said, “I would tell them what my mom always told me — to keep going, always give your best effort and to always put your best foot forward.”