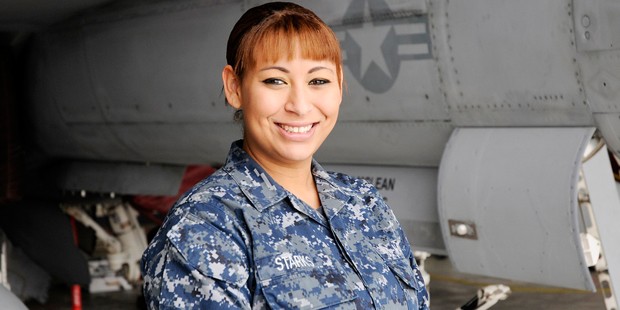 Airman Victoria Starks is an aviation maintenance administrationman with the squadron, which the Navy designates as VFA-14, and works with the Navy’s most lethal and versatile strike fighter aircraft, the F/A-18E Super Hornet.

Airman Victoria Starks is an aviation maintenance administrationman with the squadron, which the Navy designates as VFA-14, and works with the Navy’s most lethal and versatile strike fighter aircraft, the F/A-18E Super Hornet.

“I upkeep logs, records, and data processing for the aircraft,” said Starks.

“I really enjoy my job and the atmosphere I work in,” said Starks.

Starks said she is proud of the work she is doing as part of the squadron’s 217-member team, helping to protect America on the world’s oceans.

“We make sure that all components of the aircraft are mission ready,” said Starks.

“I’ve had a lot of opportunity to grow professionally in the Navy,” said Starks.