Mitch Rapp and Irene Kennedy are back 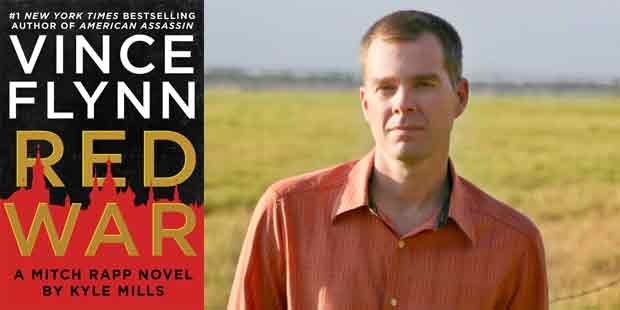 Mitch Rapp and Irene Kennedy are back, in the book Vince Flynn’s “Red War.” But this time they have a new adversary and a new setting, pivoting to the dangers Russia imposes. They race to prevent Russia’s gravely ill leader from starting a full-scale war with NATO. With this novel, it is obvious that Mills, who has taken over the writing of the Mitch Rapp/Irene Kennedy stories, has nailed the personalities and reactions of the characters.

To understand this, the following is an interview with the character Dr. Irene Kennedy.

Elise Cooper: Thank you for doing this. You are so greatly respected and admired, the first female CIA director. Our adversaries consider you a formidable foe. But it has to be tough on your family with you spending long hours combating America’s adversaries with Mitch Rapp.

How is your son Tommy and your adopted dog Shirley?

Dr. Irene Kennedy: Both are wonderful. It’s hard to believe that Tommy is already looking into colleges. He’s grown into an intelligent and thoughtful young man despite the fact that I haven’t had as much time for him as I would have liked. Shirley is slowing down a bit, but still digging up my backyard and chewing my sofa.

EC: Do you think your ex-husband should have suffered more consequences after he emotionally abused you, especially since the #MeToo Movement?

IK: I tend not to think about the past in those terms. What’s done is done and those experiences, as horrific as they were, are part of what made me who I am today.

EC: When you became CIA director do you think you broke the glass ceiling?

IK: I like to think I put a nice crack in it. There are so many incredibly gifted women out there who still aren’t getting what they deserve in their careers. That’s changing, but reshuffling the way society has worked for thousands of years is going to take time. As Martin Luther King Jr. said, the arc of the moral universe is long, but it bends toward justice.

EC: Do you consider yourself a role model?

IK: Yes, but with the acknowledgement that not everyone has the same goals. I think it’s important not to homogenize women. All of us should pursue and be respected for whatever career choices we make — from the presidency to motherhood. While I’ve enjoyed a great deal of success in my job, that success has come with a lot of painful sacrifices.

EC: How can you remain so unemotional when some senators seem to worry more about a terrorist’s screams than the 9/11 victims screams?

IK: I’ve come to understand that most people have an extremely emotional reaction to the situations I deal with. It’s just the way they’re wired. My job is to try to hold back that tide with logic and facts.

EC: I bet that becomes more difficult with today’s politicians?

IK: Yes, a task that becomes harder every day. De-escalation is my goal in every situation, though, it’s not always achievable.

EC: Are you like Queen Elizabeth I, married to your profession?

IK: That’s a very flattering comparison! The truth is that there’s no choice but to give the job my full focus. The day I feel that I can’t is the day I’ll resign.

EC: Is the CIA your extended family?

IK: Absolutely. I’ve been lucky enough to surround myself with brilliant, loyal, patriotic people. And we’ve been through so much together.

EC: Is Mitch Rapp like a brother to you?

IK: A very difficult and belligerent one!

EC: How would you describe Mitch?

IK: Single minded. It’s what’s made him so effective during his career, but it’s also something I worry about. After his wife Anna died, he felt he’d lost everything. I think he’s just now realizing that wasn’t true.

EC: How did Thomas Stansfield, the former CIA director, influence you?

IK: In so many ways. My admiration for him continues to grow every day I sit in his chair. His poise, his reason, and his love of country are the bar I set for myself.

EC: What do you think about on the 9/11 anniversary, considering it just passed?

IK: That making sure it doesn’t happen again is a day-by-day, hour-by-hour process that will never end. As time moves on, we can’t allow ourselves to let our guards down. The threat is still out there.

EC: You lost your father to a terrorist attack. How has that affected you?

IK: Much the same way Mitch’s loss of his young love affected him — though with fewer fireworks. We’ve both dedicated our lives to trying to save others from feeling the same devastation we did.

EC: Besides terrorism, what other threats face Americans?

IK: Certainly, Russia is looming large on the international scene — it’s a country that has the ability to punch far above its weight when it comes to sabotaging the world order.

Currently, though, the most dire threat to America is internal. We as a people are turning on each other for no apparent reason.

EC: Can you explain?

IK: Government is not a weapon to use against those you don’t like or don’t agree with. It’s an instrument that should be used to strengthen the country and improve the lives of all its citizens.

EC: What advice would you give the U.S. president when faced with an adversary who feels they have nothing to lose?

IK: Find a way not to play the game.

EC: What do you do to relax?

IK: My dirty little secret: I knit. But nothing useful. Just a monochromatic strip about six inches wide that I throw away when it becomes too long for my home office. It’s how I turn my mind off.

IK: More than I know what to do with.

EC: Is there anything you want to add, if so please do?

IK: Never say any more than you have to…

BELOW IS AN INTERVIEW WITH THE AUTHOR KYLE MILLS

Elise Cooper: Rumor has it you are in Spain?

Kyle Mills: It is on my bucket list to learn a language fluently. I am trying to learn Spanish. It has been very fun so far, but has proven quite a bit harder than I thought it would be. Although the scenery is beautiful. The house I live in was built 500 years ago with walls six feet thick.

EC: Why did you pivot to the Russians?

KM: I am fascinated with Russia. I grew up reading the Cold War thrillers written by Frederick Forsyth, Tom Clancy and Robert Ludlum. With the book, “Order to Kill,” I moved Mitch to deal with the Russians. As they continue to take on the world stage, I liked the idea of this tension between the two countries. Then I had the idea that even dictators eventually get old and weak, so what will happen if someone tries to cling to power, showing signs of erratic behavior.

EC: A book quote, “Russia’s economy is smaller than New York’s,” with a military fractionally the size of the U.S. Please explain.

KM: They do not care about getting respect. They only like sneaking up on people and stabbing them in the back. Even though they do not have a lot of resources they still cause trouble around the world. I do not think we are prepared to fend off a Russian attack on the Baltics even though they are NATO countries. We don’t want to move a lot of military because we think it is a provocation to Russia. After all, possession is nine-tenths of the law.

EC: Is Krupin based on Putin?

KM: Yes, I based him on Putin’s life and resume. Putin is such a great villain. It is hard to improve on reality. Both men are obsessed with power and control. Gen. Sokolav is a bit different than Krupin. The Russian President only is out for himself, while the General is a nationalist who feels Russia has been cheated out of its positon to rule the world. Both are evil.

EC: Are Grisha and Mitch similar?

KM: They both had women they loved injured or killed because of who they are. But Mitch became who he is because of his anger and sense of duty. Grisha went into it because he was good at it and did not want to be a farmer. He never fought because he believed in something, but did it because it paid good money. I think they are motivated in different ways.

EC: What is Irene’s role in the plots you write?

KM: She is the puppet master. In this book everything that happens is orchestrated by her. For her, it is winning, but not letting anyone know we won. Everything folds into place without people knowing she is involved. She always has some way to get what she wants, yet, stays in the background. I see her playing a large role, but not like in the book “Protect And Defend” that Vince Flynn wrote. I never really liked that she was captured by the Iranians and always felt she would never have put herself in that situation.

EC: Mitch has a relationship with Claudia, but she was part of the team killing his wife Anna?

KM: In “Consent To Kill” he forgives her and decides to let things go. It is like that line from the “Rocky” movie where he says about his relationship, played by Talia Shire, “she fills the gaps.” They understand where each other is coming from although the resentment feelings are there. I just haven’t explored them that much. Maybe in the future.

EC: Please explain this book quote, “The political parties are no longer organizations concerned with administering the country’s affairs. They are election-winning machines.”

KM: Most politicians do not even deny doing what they do to help them just get re-elected. They do not do it to help this country. It is hard to run the country like that, where the fundamental goal is only to get re-elected and not to spend time governing. I used to live in Africa and noticed that some of the tribes hate each other so badly they would harm themselves in an effort to harm the other tribes. But we are not a Banana Republic so we should not act that way.

KM: Azarov will not be back. He has traveled back to Costa Rica and will retire, but Scott Coleman will be prevalent. Also, I see all these books about Mitch and Irene, who are the indispensable characters to the story. When I thought about what to write I very much wanted to stay out of politics. I jokingly thought of having Mitch fall out of plane over the drug fields of Columbia without a phone to ask for help. I turned around 180 degrees, because I decided to write about a biological threat and the next presidential election.