Offensive free agents on the market 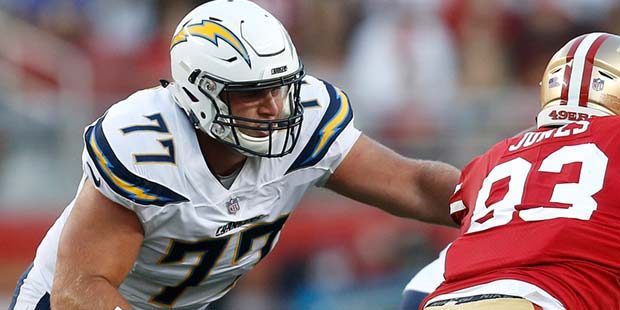 We also wondered if General Manager Tom Telesco will mirror the Los Angeles Rams’ strategy in the 2018 offseason where their front office opened its pocketbook and signed a number of high-profile players to big money contracts they acquired via free agency and trades.

As bad as the defense was exposed in the Chargers playoff loss to the Patriots, the offensive line fared just as bad — per Next Gen Stats on the first half of the game, “The Patriots pressure on Philip Rivers has been the key to the first half. No QB has faced a higher rate of pressure than Rivers in a game this season (71 percent). No Pressure: 5/5, 100 yards, 1 TD (158.3 passer rating), with pressure: 2/11, 21 yards (39.6 passer rating).”

With the free agency period starting in just two weeks we will now focus on the offensive side of the ball where a few analysts believe the Chargers will use its first pick on an offensive lineman. Having released RT Joe Barksdale last December and question marks regarding the health of OG Forrest Lamp (only two appearances in 2018 after missing entire rookie season in 2017 due to a knee injury), Telesco must upgrade the O-Line to protect QB Philip Rivers who is expected to sign a contract extension this offseason.

“As such, I like the idea of hedging the bet on Lamp by drafting a player who has OT and OG starting ability — that’s Risner. Right tackle is the immediate fit, as Risner steps over stopgap option Sam Tevi, but you can always mix and match Lamp, Risner, and Tevi to make sure you’re starting the best duo on that right side.

“While the Charger line was generally solid this season, they also have to start preparing for life without Russell Okung and Mike Pouncey in the upcoming seasons — those are two older players at a position that’s often unkind to 30+ year olds. Trenches should be the focus for a team that got absolutely bodied on Sunday.”

Reuter on Risner — “New England exposed the right side of the Chargers’ line in the Divisional Round. Risner is not massive, but he’s tough to beat and could play multiple positions.”

Dan Kadar — Jawaan Taylor, OT, Florida. Said Kadar, “Russell Okung has been a nice addition on the left side of the Chargers’ offensive line, but an upgrade over Sam Tevi could be used on the right side. Martez Ivey seemed to get more of the attention on Florida’s offensive line, but Taylor is the better player. He can handle speed rushers on the edge, and at 6’5 and 328 pounds, he has plenty of size and power.”

Below is another look at Pro Football Focus’ (PFF) top 50 players who are set to become free agents on March 13. This is a list of the offensive players ranked lower on PFF’s list who might be willing to sign a cap-friendly contract to play for a Super Bowl contender. Comments and cap numbers provided by PFF’s Mike Renner and Spotrac, respectfully.

Renner; “He’ll be 32, but even if he has lost a step from the 4.49 he ran at the combine in 2009, Cook is still a fantastic athlete for the position. His 1.83 yards per route this past season was seventh-best among tight ends.”

*The Chargers signed 38-year-old Antonio Gates to a 1-year deal for $2,500.000 last season and the future Hall of Famer finished the season with just 28 receptions, 333 yards and two touchdowns.

Renner: “Morse has never been anything special as a pass blocker, but his work in pass protection would be an upgrade for many teams. He earned an 81.2 pass-blocking grade and allowed only four pressures on 443 pass-blocking snaps this past season. While he’s never played anywhere other than center in the NFL, he has the body type to play guard as well.”

Renner: “We might finally get a chance to see what Nsehke can do as a full-time starter at tackle. Washington utilized him as a swing backup for basically every position but center in his tenure there. He performed admirably jumbling around but looked best at tackle where he had a handful of highly-graded performances.”

The Endzone: Despite their poor performance against the Patriots in the playoffs, the offensive line as a whole was vastly improved thanks in a large part to the signing of veteran free agent center Mike Pouncey. In fact, Pouncey’s performance was rewarded by earning him a trip to the Pro Bowl as well as being ranked the fifth-best free agent signing in 2018 by ESPN’s Dan Graziano.

Per Graziano: “Finally, how about a little love for the offensive line? Pouncey was cut by the Dolphins and signed with the Chargers with $10 million guaranteed. In the four years prior to Pouncey’s signing, the Chargers averaged 91.09 rush yards per game and 3.63 yards per carry.

“In 2018, the Chargers averaged 117.06 rush yards per game and 4.69 yards per carry. Not that Pouncey was the only reason for the improvement, but he solidified things at a position that had been in flux for some time. Star running back Melvin Gordon has cited Pouncey as a critical factor in the improved running game due to his ability to block at the second level.”

Although Telesco struck gold by landing Pouncey without breaking the bank it is clear an upgrade is needed up front if the team has any hope of winning the AFC West and earning a return trip to the playoffs.