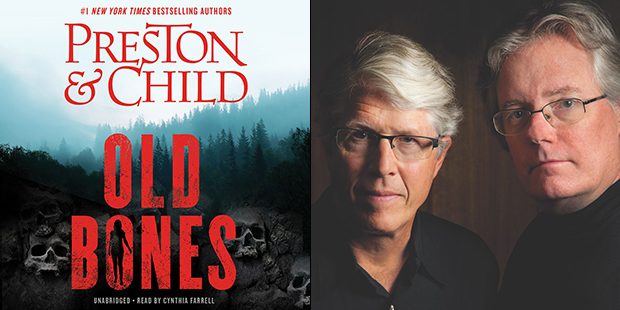 Old Bones by Doug Preston and Lincoln Child have another winner with their new series. Within a fictional story they bring to life the ill-fated Donner Party, while blending archeology, history, murder, and suspense.

In 1846 while taking a shortcut through the Sierra Mountains a group of pioneers, who ended up known as the Donner Party, were stranded during a snow storm.  Within the camp the starving desperate survivors turned to murder and cannibalism.

The story begins with historian Clive Benton approaching curator Nora Kelly at the Santa Fe Institute of Archaeology, for help. Rumors have it that there were not just two camps of the Donner Party, but actually three.  He wants the Institute, with Kelly in charge, to help excavate the skeletons. He adds a caveat to make sure they are all in by telling them besides the old bones they expect to find, which will have important historical significance, there is also a good possibility of a gold treasure worth $20 million hidden near the camp.

The authors noted, “The story has it that Jacob Wolfinger carried gold, was murdered for it, and the murderer confessed as he was dying of starvation in the snowed in camp. Yet, no one seems to know what happened to the gold. We have yet to find a historian who addressed that question.  Although some of the rescuers did steal off of the dead people. We wanted to weave real history into our story to peak the reader’s interest.”

At the same time, FBI Agent Corinne Swanson is investigating some grave robberies, all descendants of the Donner disaster. She is trying to connect it to the dig after finding out some ancient horrors are leading to present-day violence. Eventually Nora and Corinne work together to uncover the truth behind the murders.

Readers might be reminded about the two female leads. “They are previous characters that were in the Special Agent Pendergast series.  They are both tough minded and strong willed who end up clashing a lot.  They both have an adventurous spirit. :  Nora is a lot like my aunt.  She is smart, tough, intelligent, and sensitive with a lot of heart.  Nora had real tragedies in her life, especially the murder of her husband.  Now she has immersed herself in her work, and has cut off her social life.  She is not happy when an FBI agent shows up.  Because she looks unfavorably on Corinne the fireworks start.”

Readers familiar with Preston/Child might remember both these characters from previous books. Adding depth to their personalities in this book, the first in a new series, shows the women as strong, tough-minded, and independent, which makes for an interesting dynamic duo.

The plot is clever, riveting, and very interesting.  It brings to the forefront a horrific historical event.