Once a Marine, always a Marine 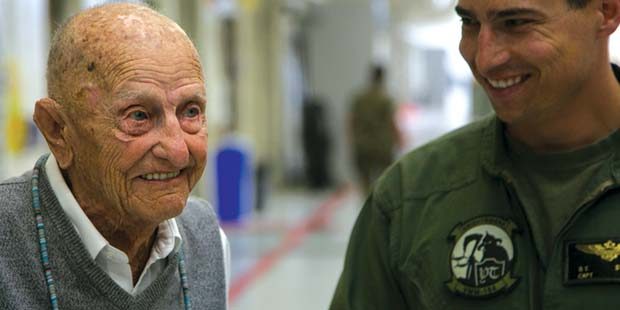 His weathered hands, aged by war and time, brushed across the fuselage of an aircraft. Like a gust of wind, old memories washed over him.

Stepping out from the hangar, the 99-year-old Marine took a firm grasp of his grandson’s hand as a Marine from Marine Medium Tiltrotor Squadron 164, 3rd Marine Aircraft Wing, escorted them onto Camp Pendleton’s flightline.

Nearly a century of experience, coupled with more than 20 years of military service, visibly weighed on his frame. Here was a man who had danced with death above the skies and oceans of the world and lived to tell the tale.

Now, on the day of his birth, Dick Cropley, a retired dive bomber, wanted nothing more than to breathe in the air with the Marines who faithfully carried on the legacy he helped shape.

On May 31st, his wish was granted.

“I can’t believe the Marine Corps would do something like this for me,” said Cropley while fighting back tears. “You get out or retire, and it just feels like the world forgot about you. I can’t express how much this means to me.”

Cropley started flying in 1942 and spent more than 20 years in the Marines. The retired Marine Corps Major operated a dive bomber during World War II and conducted operations across the globe in support of his Marine Corps family.

“The planes I flew could fit inside here,” said Cropley as he motioned toward one of the massive engines of an MV-22B Osprey.

It was a far cry from the small, single engine airplanes he had trained on and fought in during World War II.

The years seemed to fall from his shoulders as he peered across the flight line.  Hundreds of aircraft, aviation equipment and sensors welcomed him to the air strip with a rare and peaceful silence. He was home.

It was an emotional welcome for a Marine. Especially in a service that is typically seen as unflinching, hard, calm and calculated war fighters. It was a different and loving feeling on this day. The men watching Cropley soaked it all in and could only smile as they helped fulfill this Marine’s birthday wish.

“Aircraft change, aviation changes,” said Capt. Ross Studwell, the flight equipment and ordnance officer in charge at VMM 164. “But Marines never change. Cropley is a fine example of the commitment the Marine Corps is famous for.”

An endearing and welcoming attitude formed out of pure respect was extended to Cropley, who was invited as an honored guest to a change of command ceremony and a guided tour of VMM-164’s hanger for an inside and personal look at modern day Marine Corps aircraft.

What he didn’t expect was the surprise birthday celebration planned by the Marines. The “Knightriders” presented the former pilot with a cake, celebrating his 99th birthday, honoring his more than 20 years of service.

Semper Fidelis is a Latin phrase that means “Always Faithful.” The motto has been a guiding principle and the foundation on which every Marine is made. Marines have always and will always stay true to that foundation and show it through their actions.

“This is a true honor for VMM-164, but it’s just keeping with the fundamentals of Marine Corps tradition,” said Lt. Col. Joseph DiMambro, the squadron’s commanding officer. “We always remember our brothers and sisters and take pride in caring for our own. Keeping the standards of brotherhood set by Marines like Maj. Cropley means a lot to us and to the Marine Corps.”

The Marines of VMM-164 were honored to celebrate Maj Cropley’s birthday with him and many of them were enamored with his Flight Logbooks and WWII keepsakes from places like Guadalcanal and Bougainville.

Cropley’s voice broke as he held back tears. His words echoed in the small room as he thanked the Marines and expressed his pride in sharing the title United States Marine – a title few earn.

His parting words were brief, but carried the weight of hundreds of years of tradition. “Semper Fidelis.”