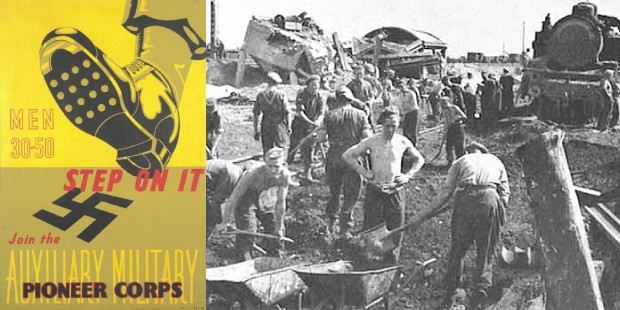 A  chance encounter led me to a fascinating story. The tale begins at the Lyceum Theater in San Diego. I was getting ready to see The Pianist of Wildensen Lane, a moving story about a young piano prodigy from Vienna who was put on the kinder-transport to England by her parents in 1938.  As I was thumbing through the play’s press kit, a gentleman next to me leaned over and whispered, “I was there.”  What unfolded was an intriguing piece of WW II history.  The journey began in Nazi Germany, led to Britain’s Pioneer Corps and, finally, to America.

In 1935, Peter Manes left his home in Berlin.  Peter’s father owned a photographic business and his mother was a singer.  His parents realized that, as Jews, they were unsafe, so they sent him to family friends in England. At first, Peter spoke no English but, within six months, he won a writing contest while attending prep school. Manes’ education continued at a Quaker high school, where he graduated in 1938. In 1940, he enlisted in Britain’s Pioneer Corps, which allowed Germans and Austrians who had fled their homes due to Nazi oppression to serve in the war effort.

During the hostilities the Pioneer Corps was mainly responsible for jobs that included laying track, clearing rubble, constructing airfields, roads and bridges. However, over 20 Pioneer Corps’ companies saw combat during the Normandy Landings and in France with the British Expeditionary Force. Refugees were recruited as secret agents and some even parachuted behind enemy lines to spy for the Allied war effort.

In 1941, Manes married and became a citizen of the UK.  By 1945, he had risen from Private to Staff Sergeant and worked in various arenas, including engineering, machinery and tank repair, interpreter and even as a driver for a US Colonel in Cheltenham (a listening post for spying).  There, he was shocked when one afternoon he ran into his aunt and cousin who had escaped from Nazi Germany. Until war’s end, Peter’s assignment was in Devonshire with an intelligence unit.

After that, like most soldiers, Peter turned from war to the next phase of his life, reinventing himself.  Manes was a tinkerer and self-taught engineer.  He moved to the US in 1957 and eventually started his own business, building sophisticated, high end air-conditioned computer rooms. Today, still vigorous in his 90s, he is a patron of the arts in San Diego.

It’s a remarkable story of luck and perseverance.  It’s one man’s journey, irretrievably linked to WW II.  And, 70 years later, I learned about it when he leaned over and whispered to me “I was there…”

Postscript: Unfortunately, Peter Manes’ parents did not survive the war. The family’s company was seized by the Nazis; decades later reparations were made at 50¢ on the dollar.  Incredibly, one in seven German-Jewish refugees joined the British and Occupation Forces in Europe after the war.  In 1946, King George VI decreed that, in recognition of the Pioneer Corps’ contributions, the word “Royal” was to be added to their title.