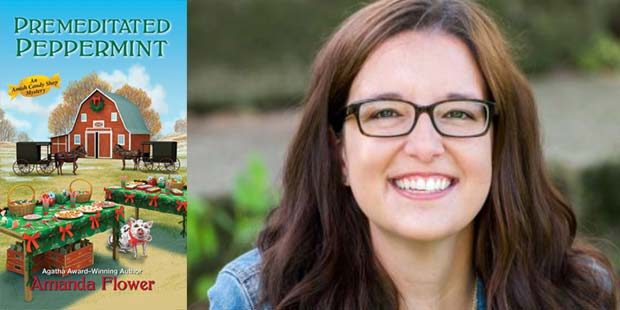 “Premediated Peppermint” by Amanda Flower is a delectable read. People are treated to an intriguing mystery with likeable characters, some kooky, a charming setting and humorous dialogue that will put a smile on reader’s faces.

A book quote describes it as a “Norman Rockwell postcard.” Flower feels, “It is typical rural Ohio. A small town with a gazebo and festivals associated with the different seasons. This is how I wanted my readers to imagine the town. I based it on Berlin, Ohio. Currently, I live an hour from Amish country. I was a librarian and lived in Holmes County for three years. I always wanted to write in a book the scene where the nativity parade marches down the street with both the English and Amish watching. There is a Christmas market where all the shops in the village are represented.”

The main character, Bailey King, returns to Harvest Ohio in Holmes County to help take care of her Amish grandmother after the death of her grandfather. She takes over the running of the family shop, Swissmen Sweets. In this story, Bailey is preparing peppermint treats for their booth at the Yuletide in Harvest Festival when she gets an unexpected and unwanted visit. Eric Sharp, her ex- boyfriend and a celebrity chef, has brought a film crew to Harvest to produce an episode for his new reality cooking show. His plan is to include Bailey and her Amish ties and possibly rekindle their romance. But a wrench is thrown into the community when the crew’s producer is found murdered and Eric is the prime suspect. Complicating matters is Bailey’s current boyfriend, the deputy sheriff, Aiden, who thinks Eric is guilty. Bailey only wants justice to be served and proves that there are a number of people of interest. She must juggle finding the killer, running the sweet shop, and dealing with townspeople such as Juliet and her service animal, pot belly pig, Jethro, a live nativity which includes a camel, and a Christmas parade.

Bailey is one of my favorite characters since she is smart, successful, dedicated, empathetic, and motivated, which is why she makes such a great amateur sleuth. She runs into danger, not away from it. At the age of eighteen she moved out of her parent’s house and supported herself through culinary school. She knows what she wants in her life. I think she is a tough cookie because she is so spunky. She has chosen herself as the go between concerning the Amish and the police since her relatives are Amish. She is able to help Aiden solve crimes.”

This story gives a sense of a small-town community and the differences between the Amish and “English” cultures. People will feel they are taking the horse and buggy ride with the Amish. The plot gives off an old-fashioned feeling without the present-day technologies. Readers will eat up the delightful cozy mystery with fascinating characters and a pleasant setting.