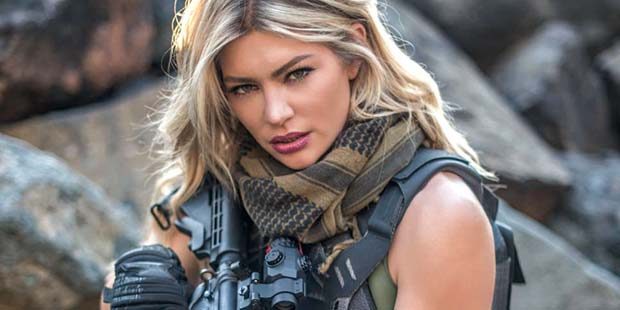 Despite being unsure about what she wanted to do with her life after graduating from high school, Shannon Ihrke enrolled in college. Little did she know that during her time there, she would find a passion for pushing her mind and body to the limit and become a sergeant in the U.S. Marine Corps.

Almost two years into school and still undecided about her career, Ihrke began to feel overwhelmed from working two jobs to make ends meet and studying full-time. She met with a school adviser to go over financial aid, which she did not qualify for, and was told that the only way to get free tuition in Minnesota was by being a single mom or being in the military.

“I decided to research the different branches, and a Marine Corps recruiter caught me on the way out from talking to an Air Force recruiter,” Ihrke said of the moment she decided to join the military. “He explained how tough the program is and said, ‘A girl like you probably wouldn’t make it through boot camp in the Marine Corps.’”

The statement resonated with Ihrke, who says, “I took that as a challenge and asked, ‘Where do I sign up?’”

From there, Ihrke packed up for three months of boot camp, where she trained in mixed martial arts and rifle training — and graduated.

“I loved it,” she says. “I loved pushing myself. I realized how mentally and physically strong I really am, and it was an empowering feeling,” she says, noting that the all-female boot camp was a tough, but empowering experience.

“I had drill instructors that were beautiful, smart women. They were amazing — and it motivated me even more.”

For Ihkre, boot camp and the month-long Marine Corps combat training that followed pushed her body and mind beyond what she had imagined. “The hardest part about boot camp is your mental strength,” she notes. Another tough part about officially becoming a Marine was the feeling of having to prove herself to her male peers.

“When people think of a Marine, they expect to see a man, but when I showed up to my unit, some people automatically thought that because I was a woman, I wouldn’t be able to keep up or be as good.”

Being judged on appearance only fueled her drive to be the best.

“You have to work twice as hard to be seen as an equal, so my goal was always to push myself to be as good if not better to show them you can be on the same level,” she said.

Her discipline and dedication paid off. Within two years, she earned a rank that some four-year Marines don’t even achieve. “I was meritoriously promoted from E1 to E4,” she says. Ihrke was evaluated on everything from her physical strength and military knowledge to an area where she has excelled in since childhood: shooting.

“I always liked shooting guns,” she says, noting her expert-level rifle qualification by Marine standards. “I grew up shooting guns with my dad, which is part of the reason I did so well in the rifle range when I was in the Marines.”

However, Ihrke believes her confidence in herself and drive to prove naysayers wrong are what ultimately helped her earn the rank of sergeant.

“It’s kind of natural to judge a book by its cover,” she muses. “But then, it makes you want to be as good, if not better than those people to show that you can keep up and you are equal.”

Ihrke graduated from Elmhurst College with a bachelor’s degree — and without student loan debt. Her time in the Marine Corps came to an end in 2016, but she says it’s something that has permanently affected her life and is a constant source of pride. “In and out of uniform, I feel very proud because no one can take the experience away from me,” says the veteran.

Ihrke flirted with professional modeling during the final six months of her active duty when she would take leaves on some weekends for shoots, eventually laying the foundation for her journey to Maxim.

“Maxim was having this contest called ‘Hometown Hotties,’ and I sent in my pictures,” she said. “I never thought I would win. Once (I made) the final 10, they flew me out to Vegas for another shoot. And when they found out I was military, they said they wanted to do another special shoot with me.”

She did not hear from the magazine again, to her surprise, but found out that she landed the magazine cover after a friend of hers called her at 6 in the morning to deliver the news.

“My friend was at the airport and he called me and said, ‘Congratulations on getting the Maxim cover.’ And I was just stunned. I had no idea.” Ihrke was overjoyed. She ran to the nearest bookstore and bought every copy of the magazine it had. “I was freaking out!” she said.

Ever since making the cover, Ihrke’s life has transformed completely. She has landed numerous gigs including catalog, print modeling, runway and even serving five years as a spokesmodel for The Loop, a radio station in Chicago. Although she has left the military and has grown into a full-time model, she misses the armed forces. When Thomas Prusso, a renowned photographer, reached out to her to do a military-themed calendar shoot, she was brimming with happiness.

“It was a lot of fun. I still love the Marine Corps and think it gave me a lot of direction and am glad that I did it,” she said. “I’m still involved in several military charities and work closely with the Chicago Marine Corps Foundation, which supports giving scholarships to kids that have dads or moms that were wounded or passed away in the military.”