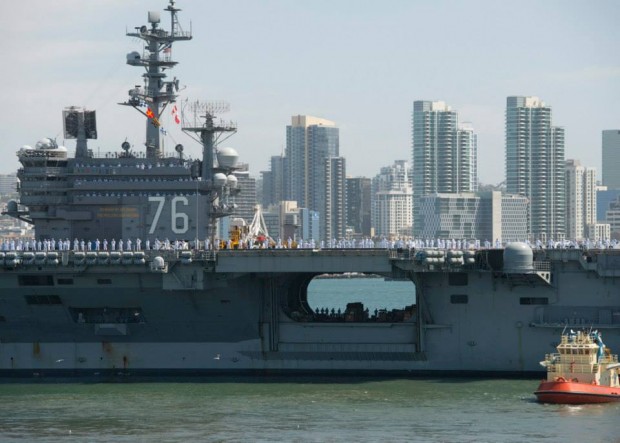 “Ronald Reagan has been embraced as America’s Flagship. Not only does she have strong ties to Americans, she also has ties to the people of Japan,” said Rear Adm. John Alexander, commander, Battle Force 7th Fleet. “In 2011 Ronald Reagan was one of the first responders to assist in the aftermath of the earthquake and tsunami that devastated the east coast of Japan during Operation Tomodachi. The ties that were established with the ship and our host nation will continue to grow.”

Ronald Reagan successfully completed a post-hull-swap assessment and sea trials, which included a flight deck certification, preparing ship and its crew to assume its new role as the U.S. Navy’s forward-deployed aircraft carrier.

“USS Ronald Reagan is 11 years newer than USS George Washington (CVN 73), which means the carrier has benefited from 11 years of evolving technology,” said Capt. Christopher Bolt, USS Ronald Reagan’s commanding officer. “America’s Flagship will serve our nation as a cornerstone of the Forward Deployed Naval Forces based in Yokosuka, Japan.”

USS Ronald Reagan is scheduled to arrive in Japan in the fall of 2015, which will mark the ship’s first time back to Japan since supporting Operation Tomodachi.

USS Ronald Reagan provides a combat-ready force that works with the navies of other nation partners to protect the collective maritime interests of the U.S. and its allies and partners in the Indo-Asia-Pacific region.