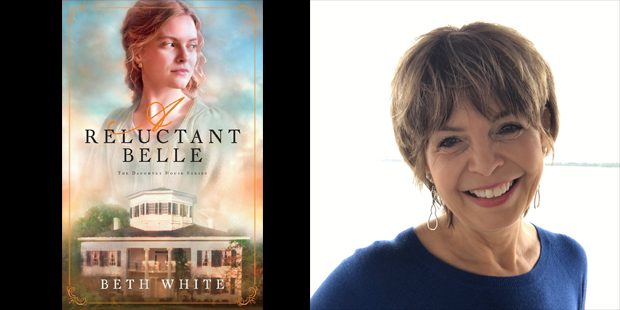 Reluctant Belle by Beth White has a love triangle, assassinations, and the upheaval that occurred during the Reconstruction Era in the US. Readers are transported to the time period.  Through the character’s banter and dialogue White is able to lighten the somber and disturbing events.

Showing the injustice, the story delves into how freed slaves struggled to negotiate their new lives. Those that supported them in the white community had to face bitterness, resentment, and even violence as the KKK came into prominence. These acts of aggression included

secretive gatherings, church burnings, and beatings. The heroine, Joelle Daughtry, wants to help the freed slaves by teaching them to read and write, standing up to those in the town and in her church, who want to restrict their education. She also, using a male pen name, writes her opinions about slavery, building schools for slaves, and voting.

The other piece of the story has the hero, Schuyler, readjusting his views after his father, a moderate Southerner, running for political office, is assassinated. Wanting to find out who is behind this he enlists the help of Joelle’s brother-in-law, Levi Riggins, who is a Pinkerton agent, joins up with the local Ku Klux Klan even though he considers them abhorrent, and takes over the candidacy of his late father.

“I wanted to write how some white planters geared up the fear factor by claiming armed free slaves would rise up and take over the Southern economy and property.  Being educated would give them the thoughts to do it.  This is how the KKK started and then intimidation kicked in with more and more violence. They saw the freed slaves as non-functioning human beings who are terrible citizens. Joelle thought the direct opposite, that education would give the freed slaves the tools needed. The central spine of the book is the tension of those opposing agendas. This is why I put in the book quote, that if Joelle taught the freed slaves to read and write ‘they may participate in and contribute to society that has, for the bulk of their lives, demanded everything of them and returned nothing!’”

The love triangle is between Joelle, Schuyler, and Reverend Gil who recently asked Joelle to marry him.  She accepted on impulse and soon after regrets her decision. He expects Joelle to lose her independence and be the typical Southern Belle, staying at home to do women’s chores, with her duties to serve him as his wife. She starts to see him as weak and not aligned with her views. On the other hand, Joelle and Schuyler feel an attraction to each other, but do not act on it in the beginning, in part because they like to push each other’s buttons.

Joelle is independent, intelligent, and compassionate, while Schuyler has a tenderness and a happy go lucky attitude before his dad died. Together they fight injustice to help others. White noted, “I wanted to show how Schuyler grows from a privileged boy to a responsible adult with mature morals, ideals, and a sense of right/wrong.”

The author describes Joelle as “an introvert and a dreamer.  She has a rigid moral center and as a middle child she sometimes feels hopeless and low.  She never likes to go back on her word.”

Any fan of historical fiction will find this story engrossing. The humor was a pleasurable break from the intense storyline.