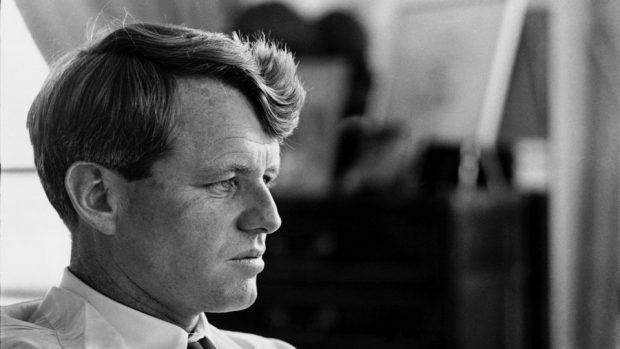 Civil dialogue does not exist in America anymore. There is no agreeing to disagree. But there was one shining moment when Robert Francis Kennedy showed the Democrats and Americans how to be pragmatic, responsible and reasonable. Now, 50 years after his murder on June 5, 1968, people should look back and see some of his common-sense statements that can apply today.

Currently, there is tension in this country between whites and blacks that has sometimes resulted in riots. When Kennedy decided to run for president in 1968, one of his goals was to end national divisions. Those who supported him were people from different races, different religions and different economic statuses. His words inspired people, and he talked realistically to all groups. Kennedy believed “in law and order. That is what we have to establish. That we won’t tolerate lawlessness and violence and disorder.”

During another campaign rally, he spoke of unification.

Shortly after Martin Luther King Jr. was assassinated, he spoke to a group of blacks in Indianapolis even though his advisers and the police chief advised against it.

After these remarks, the crowd dispersed and Indianapolis was one of the few cities in America where there were no riots. Too bad President Obama could not have looked back on these words and used them to show he was a unifier instead of a divider.

RFK struggled to find realistic solutions to problems. He wanted to build a system of justice that enjoyed the confidence of everyone and spoke of improving lives, not just in the present, but children’s lives for the future. In various speeches, he commented on the conditions of the economically poor, “I’ve seen children in the United States starving, whether it be in Eastern Kentucky, whether it be on some of our Indian reservations or in the beltway of Mississippi.”

The Democrats today want to increase federal spending, including universal health care, offering every American a government job at a living wage, free public college tuition and encourage people to have more children than they can afford by getting cash payments with tax credits that have no strings attached for each child they have.

Unlike the current progressives, Kennedy did not believe in a culture of dependency. He felt that the federal government was not the answer to improving the job market.

“The situation across our country is getting worse despite our federal programs,” he said. “There is more dilapidated housing, more run-down housing and there are still people who are very, very, poor. People unable to get jobs, and people who don’t have a decent education, and little hope for the future.”

His solution was not to put more money into the government, “If we don’t want to destroy financially every city in the United States we are going to have to get people off of welfare. Welfare is not the answer. It destroys the individual, and it destroys his family. The only answer to that is to find jobs for people. Make jobs available for people.”

What RFK wanted was to establish a partnership between business and communities, emphasizing, “We’ve depended just on Washington for federal funds, which has been a mistake.” To prove his point, he assembled a group of leaders, architects and high profile bankers to renovate a neighborhood in New York that created 272 jobs.

In foreign affairs, Kennedy confessed to mistakes regarding Vietnam.

“I was involved in many of the early decisions on Vietnam, decisions which helped set us on our present path,” RFK admitted. He further acknowledged that “past error is not an excuse for its own perpetuation,” and “Tragedy is a tool for the living to gain wisdom, not a guide by which to live.” In addition, he always told audiences that no blame should go to those who fought in Vietnam, going as far to make sure everyone understood that he regarded those serving as brave and effective. Too bad President Obama and John Kerry could not fess up to their mistakes regarding the Iran Deal and calling ISIS junior varsity.

Kennedy always encouraged Americans to understand that “we can do better.” RFK then, and President Trump now, believed in the greatness of the United States with a willingness to venture outside the box. It is almost that President Trump has taken up the motto of Robert Kennedy as he quoted George Bernard Shaw, “Some men see things as they are and say ‘why?’ I dream things that never were and say ‘why not?’”