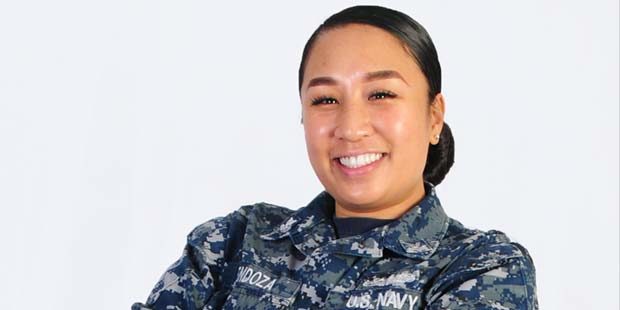 For many sailors on recruiting duty in Navy Recruiting District (NRD) San Diego, San Diego is home but not where they come from.

This is not the case for Interior Communication Electrician 2nd Class Ivane Mendoza, from Navy Recruiting Station National City. A native of National City, Mendoza feels honored to be recruiting in her hometown.

“I love that I was given the opportunity to return and give back to the community that impacted who I am today,” Mendoza said.

Mendoza said that she enjoys telling people about the Navy and the impact that it has had on her life.

“I joined the Navy when I was 18-years-old because I didn’t have the means to pay for college,” Mendoza said. “I also knew that I needed more direction and discipline, and I knew that the Navy was going to be able to provide all of that and more.”

Mendoza said that she feels like growing up in this area has given her an advantage when recruiting future sailors.

“It has been an advantage for me to go to the high school I attended, and that my little sister had recently graduated from,” Mendoza said. “I can relate more to the community and culture here in National City.”

After eight years in the Navy, and a tour aboard U.S.S. John C. Stennis, Mendoza chose orders to NRD San Diego.

“I chose recruiting duty because I love mentoring young sailors and making a difference in others’ lives,” she said. “I was excited for a challenge and also knew that recruiting could help me advance in my career in the Navy.”

After two years recruiting, Mendoza feels that there are both rewards and challenges.

“The most rewarding part of recruiting is the messages and phone calls I receive from people I put in the Navy thanking me for what I have done to help them start their career in the Navy,” Mendoza said. “It is an amazing feeling to know that all of these junior sailors are the legacy that I will leave with the Navy.”

Mendoza said that the greatest challenge she has faced is the negative perception many people have of recruiters.

“It is difficult to gain the trust of our applicants when the many people perceive recruiters as dishonest and deceitful,” Mendoza said.

Mendoza’s performance on recruiting duty has not gone unnoticed. At the command’s district training meeting, Mendoza was recognized as NRD San Diego Junior Sailor of the Year and New Accession Training (NAT) Recruiter of the Year.

“Petty Officer Mendoza is an outstanding recruiter in my top producing station,” Copeland said. “She is a caring, professional leader who gets the job done. She takes on additional collateral duties, expertly trains and mentors her future sailors, and selflessly volunteers countless hours within the local community.”

Mendoza shared advice she would give to someone thinking about recruiting duty.

“If you are considering recruiting, my advice to you is to understand the importance of what your job will entail when you are a recruiter,” Mendoza said. “You will be recruiting the future of the Navy. The stress that that this duty will come with may be overwhelming at times, but understand that it will also be the most rewarding.”

Mendoza, who recently reenlisted for six years, said that she looks forward to going back to sea duty.

“At the end of my sea tour, I’m very interested in coming back for another recruiting tour,” she added.

The Navy’s recruiting force totals more than 6,100 personnel in more than 1,300 recruiting stations around the globe. Their combined goal is to attract the highest quality candidates to assure the ongoing success of America’s Navy.