‘Seduced by a Scot’ 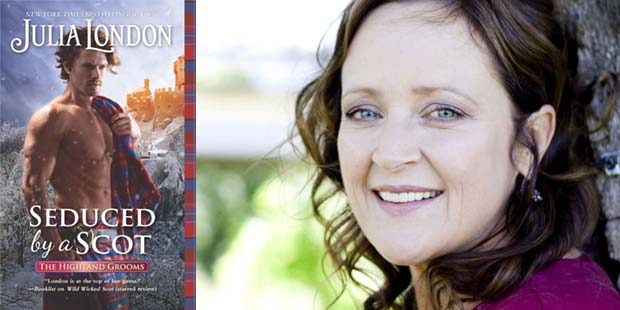 “Seduced by a Scot” by Julia London is a book about survival and how someone can overcome extraordinary obstacles. The hero and heroine had to overcome their past and learn to move forward.

London recounted how this is “the sixth and final book in ‘The Highland Grooms’ series.”

“I wanted to base it in the early 18th century when Scotland and England were unified and acted like bad cousins,” London said. “I thought it was a great backdrop to set a series about a Scottish family where the women were English. I thought it would be interesting to have the English women and the Scottish men struggling with the same problems the countries were going through.”

A prominent Scottish family hires a fixer, Nicholas Bain, to help them weather the possible scandal. Calvin Garbett has arranged for his daughter, unassuming in personality and beauty, to be married to someone whose family will help his business dealings. Falsely accused of enticing the fiancé, the ward, Maura Darby, is taken by Bain to marry an aging bachelor. Having no other options, she agrees, but silently is plotting to return for her family heirloom necklace, taken from her by the mother and daughter.

During their long journey, she vents to him about being hurt and disappointed by those who are supposed to care for her. Maura challenges Bain at every turn to see her as a person rather than a problem to be solved. He realizes that she is entitled to her necklace and plots with her to get it back. As they spend time together they grow closer and sparks start to fly between them. Bain realizes that they are kindred spirits since he was thrown out by his supposed father and the one possession, a pocket watch, he cherished was taken away. They find love and realize that they can trust one another.

Readers will enjoy the Cinderella element to the story. She was given the servant’s quarters and hand me down clothes. Mrs. Garbett took Maura’s beautiful clothes, belongings, pets and gave them all to her daughter Sorcha who was extremely spoiled. Maura tried to stay out of her way, lurking in the shadows. Both women were petty, jealous and cruel to Maura and would do anything to make her feel unwanted. Only while traveling with Bain does she become someone determined, bold and brash.

“I wanted to write Bain and Maura as soul mates,” the author said. “Both never had anyone miss them, care for them or love them. Those who should have protected them betrayed them. I think this created barriers. Unlike most men of the time, Bain did not believe she was just property and under the thumb of every man, without the ability to make decisions for herself. He treated her as an equal.”

Relationship stories are the best when the hero and heroine can share a similar background. They both had to face secrets, lies, cruelty, resentment, enviousness, and spite. Taking a journey with these two wounded souls allowed readers to share their emotions ranging from sadness to laughter.