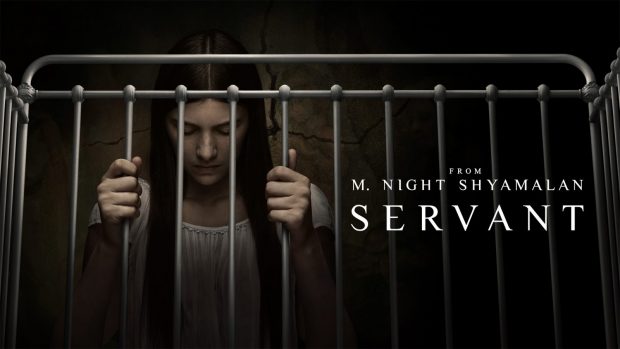 Returning to Apple TV+ for its second season from writer Tony Basgallop and executive produced with M. Night Shyamalan is SERVANT.

Dorothy (Lauren Ambrose) is devastated by the disappearance of her son Jericho and Leanne (Nell Free). Calling the police to report the kidnapping sends husband Sean (Toby Kebbell) running through the house to hide anything that that would suggest the infant was there. Instead, Sean and brother-in-law Julian (Rupert Grint) tell the police that Dorothy is suffering from the loss of their son and the fake baby was supposed to help.

Once alone, Sean decides he is going to do everything possible to find Jericho even if it means dealing with the cult Leanne has brought into their life and the woman known as May. Julian has other plans for the doll and decides he knows what is best for his sister and even hires Roscoe (Phillip Brannon) to help out. Dorothy begins to use her reporter skills and goes insane on the internet looking for new stories that can tell her more about the cult.

The story of what happened to Dorothy slowly makes its way to the surface, she keeps busy with her on-air reporting and announcing Leanne’s disappearance. When they believe her location is clear at the Marino house, Sean uses his cooking skills to find out for sure. Tobe (Tony Revolori) becomes a delivery driver and does not realize he is also being used to bring Leanne back. Dorothy has no intention of making life easy for Leanne and relies on tactics to get the information about Jericho.

What she does not count on is the arrival of Uncle George (Boris McGiver) who makes it clear that none of this should have ever happened. Convinced that Leanne has gone astray from their beliefs, he brings a mysterious case that is to remind her of why she should return to the fold. The Turners are not exactly sure what his plan is but are blinded with hope when Uncle George assures them that things will work out.

Dorothy is on a spree preparing for Jericho’s return and wants to have a family gathering. Bringing them all together is not exactly going to go as planned as Dorothy, Julian, and Sean deal with their own troubles that are hitting them hard. As if everything was not difficult enough, a knock comes at the door as a woman in a black veil introduces herself as Aunt Josephine (Barbara Sukowa).

Josephine makes it clear to Dorothy and Sean that Leanne has strayed and although the couple are in pain regarding Jericho, nothing more can be done. A showdown is about to happen with all involved and the shock is yet to come.

Ambrose as Dorothy has now been put to every ounce of stress dealing with something she has no control over. The only thing she seems to have control of is not having control. Ambrose give Dorothy moments of sanity where she seems to be on the right track and then she goes whack-a-doodle but in the best of ways that keep my attention because, and let us be honest, it is like a train wreck, and we have to see the outcome.

Kebbell as Sean seems to be the one that truly understands the insanity of what he and Dorothy are dealing with. Yet, there is that part of him that can not help but be caught up in it all with the help of Julian’s own brand of craziness. He wants Jericho, he wants his wife happy, and he wants his world back so jumping in with both feet – he seems to be landing in quicksand!

Free as Leanne comes from a world that is twisted and altered in the perception of religion. It is her breakaway to Dorothy and Sean’s house that has caused all the issues until the issues start knocking on their door! Free is torn between two worlds and the consequences be damned – literally.

McGiver as Uncle George creeps me out to the highest level of creepiness. That is how you know this character is bringing in more story that is just bursting to be told. Sukowa as Aunt Josephine is another piece to the puzzle and covered in a veil just like the mystery that is still waiting to be uncovered.

Now, lets talk about Grint as Julian because let’s put in an OMG right here. As Julian he is the go between in the chaos even if he brings a bit of unusualness to the way he thinks. Of course, dealing with his own demons, those demons sometimes cross the lines between what his sister wants, his own life and helping Sean. Then again, being an uncle to a doll is not always easy. Grint is stunning, entertaining and completely engrossing as Julian and this season he crosses a few more dangerous lines.

SERVANT is twisted, mysterious, chaotic, amusing, jaw dropping, and I almost wish it was an hour long instead of the half hour. Thinking about that more I realize that the series would not be as on-the-edge if the show became an hour per episode. Each ending is spectacular and pushes the brain to want more.

This leads to the anticipated ‘ohhhhh maaaaaaaaaaaaan’ when the season is over for the next year. Let us hope that Apple TV+ can kick into high gear and keep the tension to a minimum, oh alright, I want to know more about the secrets that seem to always be eluding. Both season one and two are available now.

In the end – where is Jericho?