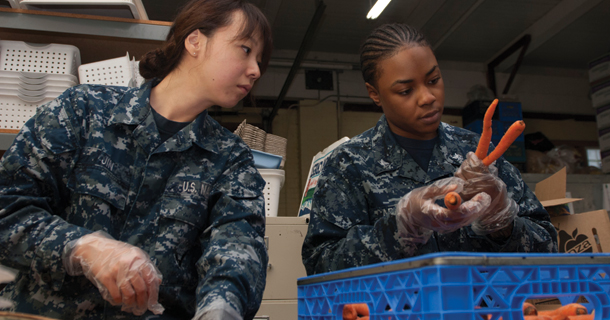 Stennis Sailors have been participating in COMRELs at the food bank since the Docking Planned Incremental Availability in June 2013.

“Navy people have been showing up on and off for ten years, but Stennis, as a command, is the first to come on a weekly basis,” said Patty Peterson, Executive Director of Bremerton Foodline. “We have even had the commanding officer and his wife show up to help distribute baskets during the holiday season.”

The food bank has only four paid employees, the rest of the labor is provided by volunteers. Sailors comprised approximately 20 percent of the volunteer labor force at the food bank. Last month alone Navy personnel contributed 1,325 hours of volunteer work at the food bank.

Volunteer projects like this allow Sailors to reach out and be a part of the surrounding community by working a couple of hours each week.

“I like to give back because I was less fortunate growing up,” said Quarter Master 3rd Class Shavona Arzu from Bronx, N.Y. “I like to help people, and the staff here really appreciates us. They are always smiling when they see us come in.”

Stennis participates in several weekly COMREL events, including the St. Vincent DePaul Food Bank and the Veterans Affairs Home. Interested parties can learn more about past and future COMRELs by contacting Muncrief at his command e-mail, zachary.muncrief@cvn74.navy.mil.