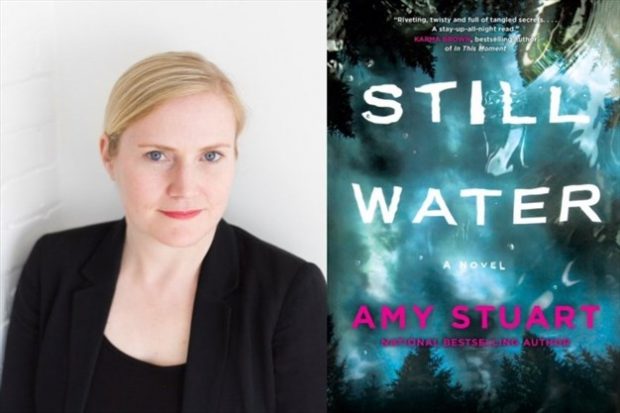 “Still Water” by Amy Stuart has a plot as riveting as the rushing river water. This psychological thriller has amateur private investigator, Clare, hunting for a missing mother and son. But the town is putting up roadblocks with their deceptions.

“I wanted High River based on how the encroachment of a city expands outward,” Stuart said. “I can remember places as a child as we drove out to the country that are now sub-divisions of the urban areas. I wanted to explore what happens when there is a rural property and the city expands, swallowing up all the rural land around it. Much of this beautiful property is taken over by developers. As in my book, each member of the community has different end goals regarding the land.”

Because this is Clare’s second case, she is still learning on the job. Sally and her young son, Matthew have vanished and Clare’s handler, Malcolm, assigned her the task to find out what happened. Luckily for her and the readers, she is a quick learner, able to keep the police and townsfolk at bay with her undercover story. Pretending to be a friend of the missing woman, Clare ventures to a safe house for the abused. Women in distress and danger go there to hide in safety, and then hopefully move on with new identities.

Truth versus lies are explored.

“This is the fundamental question I write about, over the course of the series,” Stuart said. “I intentionally have readers wonder if what Clare has said about herself is true. Truth can be so subjective. Two people can experience the same thing and come out of it with completely different versions. Does the absolute truth even exist or is it based on pre-conceptions? I try to explore what is the truth through Clare’s eyes as she comes to terms with her own experiences.”

Clare struggles with her own demons. She has been running from an abusive husband, Jason, when Malcolm finds her. Instead of turning her in, he hires Clare to work with him to find other missing persons. Although Malcolm assures her that Jason is out of the picture, Clare knows that is not the case. Starting to question Malcolm’s credibility, because he is hiding something in his past, she fears there is something serious that he is not telling her.

This story has many layers and the ending has a major twist.