Substance abuse in the military

Drug and alcohol abuse by military personnel and their families constitutes a “public health crisis” that requires the intervention of senior leaders to develop consistent and cohesive prevention, screening, and treatment services, the Institute of Medicine charged in a report released today.

The report sharply criticized U.S. Central Command policies that provide troops deployed to Afghanistan and Iraq with up to a six-month supply of potentially addictive prescription drugs and an Army policy that shifted management of substance abuse treatment from the Medical Command to the Human Resources Directorate. The investigators also blasted the Pentagon’s decision to outsource residential treatment programs funded by TRICARE insurance — the medical care program for military troops, retirees and their families.

Alcohol and drug use in the military remain “unacceptably high,” the reported noted, as nearly half of all personnel acknowledged binge drinking in 2008 and illegal drug use soared from 5 percent in 2005 to 12 percent in 2008. IOM’s findings are detailed in its 352-page report, “Substance Abuse Disorders in the U.S. Armed Forces,” which was prepared at the Pentagon’s request.

Cynthia Smith, a Pentagon spokeswoman  said Defense is in the process of analyzing the report’s findings and recommendations. “Most importantly, we want to do the right thing for the service member. If there are areas in need of improvement, then we will work to improve those areas. The health and well-being of our service members is paramount,” Smith said. 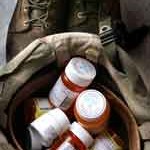 The increase in drug abuse is due, in part, to a huge rise in the number of prescriptions for pain relieving drugs to deal with combat injuries in Iraq and Afghanistan during the past decade. Such prescriptions skyrocketed to 3.9 million in 2009, quadruple the number in 2001, IOM reported.

From 2006 through 2010, 133,900 active-duty personnel, or 9.5 percent of the active-duty force of 1.4 million, sought substance abuse treatment, a statistic that does not reflect the total extent of the problem due to the stigma associated with seeking help, IOM reported.

In August, Nextgov reported that 316,248 active-duty troops were diagnosed with either alcohol or drug dependence between 2000 and 2011, based on a July report from the Armed Forces Health Surveillance Center. That was triple the number of troops diagnosed with post-traumatic stress disorder for the same period.

A Central Command policy to provide deployed troops with 90- or 180-day supplies of highly addictive prescription psychotropic drugs before they deploy to combat zones contributes to the problem — a situation Nextgov first reported in January 2011, IOM noted.

Central Command’s “prescribing practices are intended to address the potential lack of access to medications currently being taken by the service member in a deployed environment. Yet these practices may contribute to physical dependence on such medications in several ways — being given for a longer duration than is clinically prudent, given without close medical supervision, and given to service members who have alcohol or other substance use problems,” the report said.

Though troops diagnosed with PTSD or traumatic brain injury also have substance abuse problems, the Defense Department does not have a cohesive policy to deal with these problems on a holistic basis and a “lack of standardization, monitoring and evaluation of [substance abuse] policies and programs by DoD and the individual branches contributes to a variety of strategic and quality control problems,”

Alcohol abuse stands out as the major problem the services face, IOM said, and recommended Defense adopt the practices the Veterans Affairs Administration employs to routinely screen personnel for alcohol use.

“It is imperative that screening for unhealthy alcohol use be available without stigma or disciplinary consequences so that screening responses will be truthful and a brief intervention can be delivered clinically, either by Internet programs or in direct clinical encounters, such as in a primary care setting,” IOM recommended.

The report said, “Screening and brief intervention should be understood according to DoD policy to be an educational intervention akin to an indicated prevention approach. Screening is not diagnosis and brief advice is not treatment.”

Though VA and Defense developed what IOM called an “excellent guideline” for screening, diagnosing and treating substance abuse disorders in 2009, this guideline is not being followed in a systematic way by the services, the report said.

IOM said primary care providers should serve on the front lines of substance abuse treatment, dealing with troops on an outpatient basis. It recommended Defense junk its reliance on hospital or residential treatment facilities contracted through the TRICARE insurance program. This, the report said, “leads to an expensive reliance on geographically distant hospital-based treatment services, a lack of access to existing community-based outpatient and intensive outpatient services, and poor transition from . . . primary care and from inpatient to outpatient services.”

Defense policies force troops and their families to seek residential treatment because TRICARE currently does not cover outpatient therapy for substance abuse. “The requirement to use substance use disorder rehabilitation facilities should be removed from the TRICARE benefit for the treatment of [substance abuse] and the benefit should be expanded to include care in outpatient and intensive outpatient treatment settings,” IOM recommended.

Exchange sales of alcohol support a range of morale, welfare and recreation activities for military personnel. “Ironically, curbing the sale of alcohol would affect the amount of nonalcohol-related recreational activities” available to troops and their families, IOM noted.

In addition, the report urged Defense beef up the quality of its substance abuse workforce to better deal with patients who suffer from multiple mental health conditions. It also recommended using agonist drugs that treat pain but do not lead to addiction.

A retired flag officer who successfully dealt with alcoholism 18 years ago said the IOM report ignores the pressures on troops and their families resulting from more than a decade of war and multiple deployments. “The uses/abuses we’re seeing are likely predictable based on human nature’s response to the incredible stress of combat duty,” he said.

He also took exception to sections of the report that directly linked prescription of pain medication to addiction. “Our combat veterans have real injuries and real pain, requiring pain medications. Perhaps there’s a better approach to pain management. But saying that we should not prescribe as much pain medication as we do is so easy to say in a report but so difficult to accomplish in practice.”

The officer agreed that Defense should boost the quality its substance abuse treatment workforce, but said hiring civilians with no understanding of combat will not help, as civilians do not have any comprehension of the stresses that result from serving in combat.

Remington Nevin, a former Army epidemiologist and preventive medicine physician who recently left active duty after 14 years of service, said, “IOM should be strongly applauded for labeling the epidemic of military substance abuse a public health crisis. [But] the report fails to adequately address a critical underlying cause: the military’s increasingly desperate reliance on its undersized all-volunteer force.

“Put simply, our overworked volunteers have been inexorably driven to self-medicate over 10 years of unremitting conflict,” he said.