Sunday at Comic-Con brings the familiar and the new 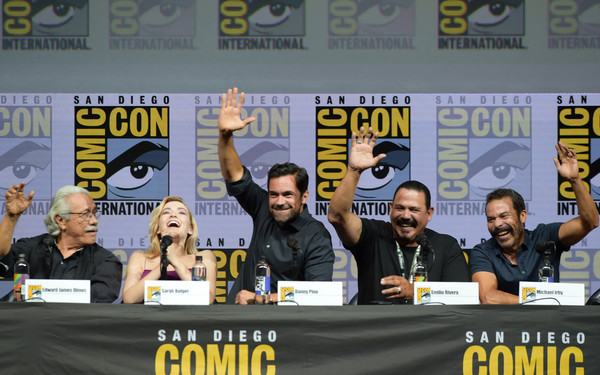 Here it is, the final day, the day that I long for and at the same time the saddest day that it’s all ending. There is mileage on these feet to be sure and a case of uncomfortable seat-itis but at the same time knowing that all the people I only see once a year will again be gone.

This year was a little more enjoyable for me as a grandparent because I made time to see my dressed up in costume Batman (don’t say Batgirl – she doesn’t like it!) granddaughter seeing all her heroes and the characters she adores. That would include the mixture of Peppa Pig and the awestruck when seeing her beloved PJ Masks in person. What totally wigged her out was seeing Batman again, and again, and again.

But, Naynay has a job to do so let’s jump in!

In Hall H, there is a feeling of crazy anticipation because it is Sunday at San Diego Comic-Con 2018 and that can only mean one thing – “Supernatural!” There is something very special when the panel consisting of Jensen Ackles, Jared Padalecki, Misha Collins, and Alexander Calvert along with executive producer Andrew Dabb talking about their 14th season of the show and reaching the historic 300th episode.

What makes the “Supernatural” panel so much fun is the obvious chemistry between Ackles, Padalecki and Collins and the way they have also taken Calvert into their exclusive and humorous group. It is almost like watching brothers just rag on each other in the most biting and loving way possible. Of course, this delights the 6,999 people that are in Hall H with cheers and even some egging on.

It’s going to get even darker (is that even possible?) in this season as fans are treated to a very eerie look at Jensen Ackles character Dean and his – well – transformation. There will also be a return of Kim Rhodes character of Jodi Mills and the Wayward Sisters. Is there more to the Rowena and Cas hint given?

Find out when “Supernatural” returns to the CW on Oct. 11.

Ripa talks about her husband’s character and asks what is in store for his character. “His character is into everything. Right now he is focused on being a thorn in his daughter’s side. She is just as stubborn as he is so I think they are going to butt heads.”

I couldn’t have been more thrilled to see the next panel in Hall H – “Mayans M.C.” is the much-anticipated spin-off of the FX beloved series “Sons of Anarchy.” The panel started off with an ear-splitting cheer for the shows creator Kurt Sutter (who I actually saw smile and it threw me off!) along with co-creator Elgin James.

The premise of the series is in the three-year aftermath of Jax Teller and the Sons when EZ Reyes is released from prison and becomes a prospect for the Mayan M.C. His older brother is already a member and shows his brother the ropes with a charter that is located on the California-Mexico border. Olmos is their father who owns a business and knows that the club is a difficult life.

JD Pardo may have a familiar face to some, but to “Twilight” fans he forever engrained in their hearts as part of “The Twilight Saga: Breaking Dawn Part 2.” He has also done his time in television with the series “S.W.A.T.,” “The Messengers” as well as “Blood & Oil.”

Another familiar cast member is that of Richard Cabral who most recently played the psychotic burglar Duncan in the film “Breaking In.” He has also had his share of television roles including the outstanding characters of Hector Tonz/Isaac Castillo/ Sebastian De La Torre in the absolutely excellent series “American Crime.”

The one actor on that panel who needs no introduction because the sound of the fans cheering drowns out hearing his name is that of Edward James Olmos. Playing the role of Felipe Reyes in “Mayans M.C.,” this actor is never far from the big screen or small. He has produced, directed and starred in some of the most beloved shows and memorable movies. I am excited to see the life he brings to this character.

Sutter also talks about the loose language and explains that the f-word is part of the world we live in now. “I’m not quite sure where the shift happened, but there is a lot more freedom in terms of language and we will be able to say ‘f**k’ on FX.” He also tells the fans with humor, “I always do a ‘f**k’ inventory at the end of every script and go, ‘oh, that’s way too much.’”

The creator was also asked if there would be any crossover between “Sons of Anarchy” and “Mayans M.C.” (you could hear a pin drop in that room waiting for the answer). “I’m really protective of that mythology and the way it ended and letting fans, whether they enjoyed it or not, to have that experience and for that idea of how that club continued. I really want to leave in the minds of the fans. Right now there’s no intersecting stories that will interfere with that, but “Sons” is a big world and there was a lot of peripheral players so there will be those kind of intersections.” I take that as an answer non-answer which can always be found with the cryptic Sutter.

Thank you FX from the bottom of this fan’s heart for bringing the anticipation for the new series which is set to premiere Tuesday, Sept. 4 at 10 p.m. on FX.

Finally, in Hall H, FX is hardly done with us as the break out his series by creator Noah Hawley “Legion” bringing its panel of stars including Dan Stevens, Aubrey Plaza who plays Lenny, Navid Negahban as Farouk, writer/producer Nathaniel Halpern and executive producer John Cameron.

The panel started out quickly when Halpern was asked if he could tell the fans anything about Season 3. A quick and decisive ‘no’ was heard and that was that. Stevens, who plays David Haller, admitted to the audience, “I know that Lenny is obviously gonna have a part to play in it. We’re off together in some form. Syd’s a bit mad. But I don’t know very much at this stage.”

Then added, “If you know the comics at all, you know there’s the potential for this guy you have sympathy for to turn into one of the greatest villains in the universe!” It is Negahban who says, “I have never played a villain in my life. I think every villain looks at himself as a hero.”

It seems what the panel could agree upon is that they are confused and that, to me, is an amazing way to keep the fans guessing about the upcoming third season, which returns to FX in 2019. Until then, keep the theories coming because I’m always interested to discover whether or not others see the series as I do and if they don’t, well, that can be fun too!

And with that, my reader friends, comes the end of the panels for me at San Diego Comic-Con 2018. It is time for me to put the recorder, camera, pencil, pen, paper and anything else work related into my awesome Edna Mode bag and leave the hallowed room also known as Hall H.

It is time for me to go out and enjoy the rest of the day seeing Comic-Con 2019 through the eyes of my granddaughter who cannot get enough. I love what I do to be sure but it is also good to get a fresh perspective and see it all through the excited eyes of a kid in a Batman outfit with flashing tennis shoes and a cape that reads, “I’m Batman – not Batgirl!”

So until next year Comic-Con’ers – I hope your journey home was a safe one and that TSA didn’t give you too much trouble with the tons of goodie bags I know you left San Diego with!