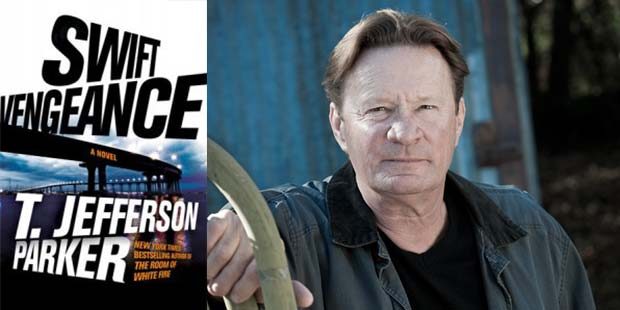 “Swift Vengeance” by T. Jefferson Parker starts out with a sharp cut, when someone is threatened with decapitation. Drones play an important role as readers wonder how they are used in today’s society, able to enter someone’s private premises, used for business purposes or in warfare to kill terrorists before they behead someone.

Lindsey Rakes was part of a team of U.S.-based drone operators attacking terrorists. The psychological toll of the work eventually led her into a downward spiral of drinking and gambling.

Trying to regain her family, she’s now in recovery. But her life is thrown into a tail-spin after someone threatens to behead her. After going on a date with Saudi born Rasha Samara, a collector of Arabian horses, she receives a written death threat, “Vengeance is justice,” signed “Caliphornia.” The handwriting looks very similar to the Rasha’s signature found on a note.

She asks her old friend, private detective Roland Ford to investigate. Knowing he needs more resources, he consults with FBI Agent Joan Taucher. The violence increases when Kenny Bryce, a former Air Force colleague of Lindsey’s, is beheaded. Taucher and Ford know time is running out and must quickly find who is “Caliphornia” before more decapitations occur.

This realistic page-turner has readers taking a journey with the characters.

T. Jefferson Parker: Drones are in the news a lot. The government had to pass who could fly a drone and where. It is scary where we are going with them.

EC: Drones are a flying warcraft?

TJP: The drone teams are put in an air-conditioned trailer outside of Las Vegas and fly live missions over countries in the Middle East. The logistics of how it works is mind-boggling.

EC: You explore the costs of duty.

TJP: This book goes into how Lindsey’s actions in the military and the resulting consequences of those actions come back to haunt her. Drone pilots seem to have to face ethical issues over the course of their career. Their nerves are shot, and many have trouble handling the long confinement. The duties are far different psychologically than being a physical pilot.

EC: The essence of the plot is collateral damage versus keeping Americans safe?

TJP: They obviously do not want to kill those people who get in the way. I tried to put myself in Lindsey’s shoes. What helps to justify drone strikes is that they are much more in control with less collateral damage than dropping a bomb.

EC: How would you describe Lindsey?

TJP: She is 50-50 macho girl and mom. I put in a quote by Joan, “Tell soccer mom she’ll be a better mom with her head attached.” She enjoyed her time in the military along with the camaraderie. The other half is very devoted and filled with love for her young son. She is also trying to climb out of her addiction to gambling and drugs. I think Lindsey is a mix of many different things. There is a lot going on for her in many different theatres.

EC: How would you describe Joan?

TJP: She is a total warrior at heart, dedicated to the proposition of “never again” after her agency missed the signs of a terrorist attack in San Diego. I consider her a superhero of sorts, solely dedicated to her job and task. I think she is obsessed with her law enforcement job. Overall, she is a loner, a straight-shooter who blames herself for people dying at the hands of terrorists.

EC: There is an important book quote, “The ghosts of 9/11 are not just Taucher’s. They belong to all of us who get fooled.” Please explain.

TJP: We as a people need to be vigilant to protect ourselves from another 9/11 or San Bernardino. U.S. citizens have short memories and are busy people with hectic lives. We tend to forget things. We are now back to our comfortable ways and perhaps do not keep an eye out or pay attention. Our beautiful free society is a blessing, but also our Achilles’ heel.

EC: You had Joan use make-up to hide her looks?

TJP: It is a metaphor to hide her blemishes. She has this hematoma that will not heal, which she sees as an atrocity and is diligent to cover it with make-up. It is almost that she wears a mask to hide what she is willing to reveal about herself. She is a closed singular person swabbed in make-up so no one could see her true face.

TJP: They are both duty-bound. Neither are proud or ashamed for the work they have done. They are tough and pragmatic. I tend to write characters in pairs. I think those in the military and law enforcement have more than a little in common.

EC: Why the San Diego setting?

TJP: I like to write about a place where I live. I have resided in Northern San Diego County for 18 years. I love the geography, the variety of people and the history. Because the center of the story surrounds terrorism, I thought about the fact that some of the 9/11 terrorists learned to fly planes in San Diego.

EC: There is a scene where a loved one lost someone?

TJP: I wrote how there are different ways to put one foot in front of the other. I based it on my beautiful young wife, who died of cancer when we were in our 30s. We only had been married for a couple of years, but I remember it as a long agonizing year. She is Roland’s Justine.

It was one of the pivotal times in my life. This idea of what do you need to forget comes up either directly or indirectly in all my books. I question, is it good that memories fade over the passage of time or should we preserve them? Roland is going through with this because this is what I went through. There are real-life videos that people carry around in their soul.

EC: There is a great quote about dogs, “The more time I spend with them, the less time I want to spend with people.” Please Explain.

TJP: We lost our dog back in October, a big, friendly yellow lab. I am really a dog person and have had them for decades. I love writing about them.

EC: Where did you get the idea for Zeno the dog?

TJP: He is a Cane Corso, derived from the Roman dog. I was doing research and saw this picture online. I was looking for a very physically scary defense dog. There was this black and white photo of a man with a hat who looked like one of the Mario Brothers and by him was this scary dog. I think if they are raised by decent people they are good dogs.

EC: You write about black Mustangs and Arabian Horses?

TJP: I had a red and black Mustang once. I do like the looks of the new one. I am not a horse person, either Arabian or Western. I wanted to give the person of interest a profession so I did research on how they are bred and what is their temperament.

TJP: It will be the third Roland book, “The Last Good Guy.” I always write to entertain and to make people think. He is hired by a woman whose sister has gone missing.