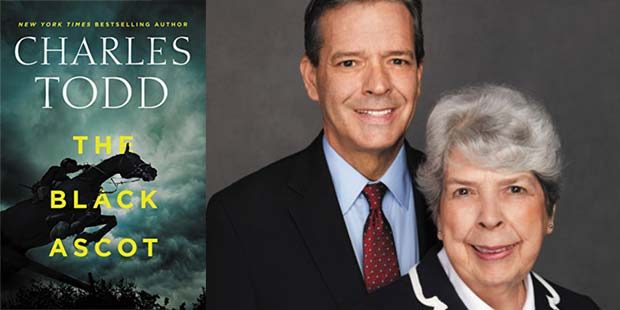 “The Black Ascot” by Charles Todd ratchets up the mystery. Readers are able to get a deeper understanding of Scotland Yard Inspector Ian Rutledge, while getting a glimpse of the social and political trends of the 1920s.

Unlike many of the past plotlines, this one focuses on a cold case. Ten years ago, a woman was murdered after attending the Black Ascot race, the famous 1910 royal horserace honoring the late King Edward VII. The suspect, Alan Barrington, has eluded capture and the aggressive manhunt. Now it appears that Barrington has returned to England, and Rutledge is chosen to conduct a quiet search under the cover of a routine review of a cold case.

Determined to get into the mind of Barrington, Rutledge delves into all of his relationships and secrets, enlisting the help and advice of his alter ego, Hamish. But everything seems to be put on hold after the inspector is shot. Along with his supervisors and family, he questions whether it was attempted suicide, or was someone out to kill him. The only way to save his career, and his sanity, is to find Alan Barrington and bring him to justice.

There are many twists and turns that keep readers on their toes. Each character has strengths and flaws that have people questioning if they are good or bad, likeable, or not.

Charles Todd: We dealt with a cold case in a previous book, “A Fearsome Doubt.” Rutledge believed he arrested the wrong person and must find the real culprit. This plot spurred us to think about a story where some of those involved in the case were dead, which makes the trail go cold. Rutledge had to figure out who protected the suspected killer and who was against him since there were so many false leads.

EC: How does the Black Ascot play into the story?

CT: It was our starting off point, and we called the killer, the Black Ascot Murderer, since the killing surrounded this event. She was killed coming out of the races. Her homicide spurred much media and public interest.

EC: What is the Black Ascot?

CT: After Edward VII died in 1910 there was a period of royal mourning. People thought the Ascot races should be cancelled. Since the races were an integral part of society, it was decided to go through with it. Instead of wearing the glorious hats and gowns as in “My Fair Lady,” they decided everyone should wear black; thus, the Black Ascot.

EC: It seemed this story had more of Hamish?

CT: He comes and goes, but is prevalent whenever Rutledge is particularly stressed. He is really Rutledge’s sub-conscious way of handling the fact he killed this man. It is a coping mechanism for him on dealing with this traumatic event.

EC: You refer to shell shock?

CT: Officers were made to carry out commands from generals. Yet, the superiors were never on the front lines. Many officers were haunted by those needlessly killed because of foolish orders. Basically, they felt survivor’s guilt. The generals looked at the dead as numbers and never realized or understood the change in tactics and technology. There were two kinds of shell shock. One has the high explosions sending out a concussive wave that broke the sound barrier. The other is where the veterans had emotional trauma.

EC: They were the silent warriors?

CT: Men did not want their spouses, children, or parents to know what they had been through. They did not want them to experience the nightmares they had. We put in this book quote, “What we’ve seen, what we’ve done, ought to stay in France. But it didn’t, it came home in our memories. They aren’t memories we want you to know.”

EC: Society looked down upon it?

CT: It was a moral failure that reflected on the individual and their family. It was not only a shame on the veteran, but a shame on the family for producing a coward. Families would disown sons who had lost their nerve. We talked with readers who came up to us and said thank you for allowing me to understand my grandfather or father now. Veterans also say thank you, which means so much to us.

EC: Another stigma is suicide?

CT: It was a crime. If you attempted suicide you could be put in jail. If someone committed suicide they would not be allowed to be buried in consecrated Church grounds because it is considered a moral sin. Many times, the family doctor would say the man who died was due to a gun going off while cleaning and declared it an accidental death. This makes no sense since a man could take his gun apart in the dark during the war. Those who did it had the feeling, ‘I have taken as much as I can take, and do not know what else to do.’ They could not talk about it, and did not know where to go to for help. They just could not cope.

CT: Nobody is pure good and pure evil. Rutledge understood this and is able to look at the whole person and not make snap judgements. He knows that after someone died many people only remember them kindly. The twists in the book come from who the person actually is, and not what they seem to be.

EC: How would you describe Alan Barrington?

CT: Intelligent and clever. He missed England, but knew if he stayed for trial he would probably be hung. He is wealthy.

EC: How would you describe the suicide victim, Mark Thorne?

CT: He was able to get the attractive Blanche to marry him even though she had a lot of suitors. He had all the breaks up until the time he lost most of what he had financially. When faced with more than he could handle he does not know how to deal with it.

EC: You brought back Kate, someone who is attracted to Rutledge?

CT: Yes. She comes back every once in a while. We are watching how this relationship develops. It may turn into something or it may not.

EC: I was hoping during the hospital scenes the nurse would be Bess Crawford, your other series character?

CT: Some are hoping that we will do it. But we cannot, because in the books, Bess is two years behind Rutledge.

CT: Rutledge is asked to look at a case that has never been closed. As he does this, he sees certain aspects he never suspected before. We went back to a place we visited years ago and it started the ball rolling because we saw things we did not see the first time we visited.

The next Bess Crawford book has her returning to Paris during the peace talks. She explores how some of the soldiers faced the aftermath of the war. In this book, Bess has to make some decisions about her life.