‘The Girl From Berlin’ 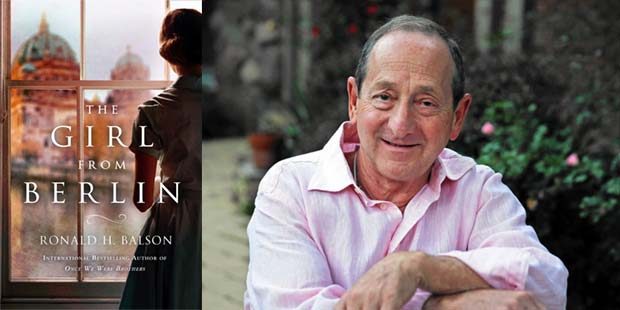 “The Girl From Berlin” by Ronald H. Balson has readers experiencing the emotional roller coaster ride of guilt, anger, fear and redemption. Chapters alternate between the 1930s/1940s and 2017. The connection between the time periods is a manuscript that Ada Baumgarten has written about her life under Nazi rule and the devastating effect it had on Jews — particularly Ada’s family.

Not only is this book a powerful historical novel, but it also has a riveting mystery of murder, deception and greed. The questions asked throughout the present-day chapters: How does the accounting of a young Jewish girl’s life in the 1930s and 1940s relate to a deed for an Italian farm, and what became of Ada?

It is almost like taking a time machine from present-day Italy back to the 1930s during Hitler’s regime in Germany. The story opens with the recurring characters Catherine Lockhart and Liam Taggart being asked by an old friend to travel to Tuscany, Italy to save the farm and priceless wine vineyards of his aunt, Gabi Vincenzo. A powerful corporation claims they own the deeds, even though she can produce her own set of deeds to her land.

Since Catherine is an attorney and her husband Liam is a private investigator, they set forth to try to help the elderly woman. Upon their arrival in Tuscany, Gabi tells Catherine and Liam to read a memoir by a woman named Ada Baumgarten, a German violinist forced to flee Berlin and settle in Bologna, Italy, after the Nazis took power.

The author also transplants readers back to the Nazi era where Jews were unaware of the horrors awaiting them: first deprived of careers/businesses, then property, basic rights and ultimately, for many of them, their lives. Even more disturbing is the knowledge that while this was happening, many of the non-Jewish German population either does nothing or actively assists. Within these devastating events the author allows readers a reprise with the classical musical scenes and the various descriptions of certain musical works.

This novel puts a personal touch on the Holocaust where the 6 million Jews who perished do not seem like numbers. Starting with the first pages of the book, readers will be so mesmerized there will be no turning back. Balson does a great job of intertwining the music, the rise of the Nazi party to power during its early years, its effect on Jewish lives and the comparison between Jewish treatment in Hitler’s Germany and Mussolini’s Italy. It is a story of courage, survival and hope.

Elise Cooper: The novel is really the story of two women.

Ron Balson: I got the idea for Gavi when visiting my son, who was studying abroad in Italy. We drove around Italy and tried to visit as many wineries in Tuscany as we could because they are so quaint and beautiful. We found out that German corporations own some of them. I thought about the German occupation of Italy from 1943 to 1945 where they brutally seized Jewish property.

Ada came about from my long-time thoughts about Jewish artists and musicians during the Nazi regime. During the Weimar Republic, Germany’s government, from 1919 to 1933, the period after World War I until the rise of Nazi Germany, there was a cultural explosion of art and science.

EC: You depict how many Jews did not realize until it was too late what was really happening.

RB: I wanted to explore the Jewish options open to escape from the Nazi barbarism. Many did leave Germany and Austria before the war. Yet, many could not just pick up and go some place. Where would they go since the surrounding countries of Poland, Austria and Czechoslovakia were not options? Anywhere someone went there were no job, no community and no money. These are formidable barriers. They tried to convince themselves things were not so bad, especially since events happened in increments. First Jews had to wear armbands, then Jewish stores were painted, but the atrocities started later.

EC: What about the famous German conductor Wilhelm Furtwangler — friend or foe of the Jews?

RB: I think he had a bad deal at the end of the war. He was unfairly criticized because he stayed and continued to conduct the Berlin philharmonic. Many felt by doing this he gave prestige to Hitler’s Germany. He did denounce Hitler as an enemy of the people, defied Hitler’s order to rid the orchestra of all Jewish players, refused to do a Nazi salute and did not play their anthem. He continued to play Jewish composers and invited Jewish soloists. I think he was a good man.

EC: What is the role of classical music?

RB: A big one. Some people have written to me and told me that while reading a scene in the book where Ada plays Mozart they put on their Apple music. My grandmother, who was a concert pianist for the Detroit symphony, influenced me. She passed on to me the love for classical music. In fact, just as with my character Ada, she soloed at a time where there were no women in the actual orchestra.

EC: What about the role of the Holocaust?

RB: This is not a concentration book except for the scenes where Ada was in the Theresienstadt concentration camp. It is based more on society and what was going on in Germany and Italy. I wanted to tell the story of what happened to Jewish artists, and give readers an understanding of what the family had to go through with the brutality and emotional abuse.

EC: It is concerning how the German population did nothing regarding the Jewish mistreatment.

RB: I wrote this book quote by Ada, “Perhaps the most hurtful and inimical result of the campaign was the pervasive acceptance of Nazi policies by German society … it became apparent that they would no longer stand up for us. Those who uttered hateful speech were sinful, but the greater sin was committed by those who did not speak at all.” The Nazi policies were accepted. Remember Germany had seen a serious depression. With the Nazis, there started to be a booming economy. Since this population was not Jewish they turned the other way. A good lesson to take out of this book is that we as a society should not turn our backs to those in need. We need to be on guard for repressive societies.

EC: How would you describe Ada?

RB: Strong, determined, well principled, lives for her art and is loyal to her conductors and family.

EC: How would you describe Gabi?

RB: It will take place over three time periods with the Lublin ghetto, the DP camps, and in 1965. This man is on a quest. It will probably come out late in 2019.