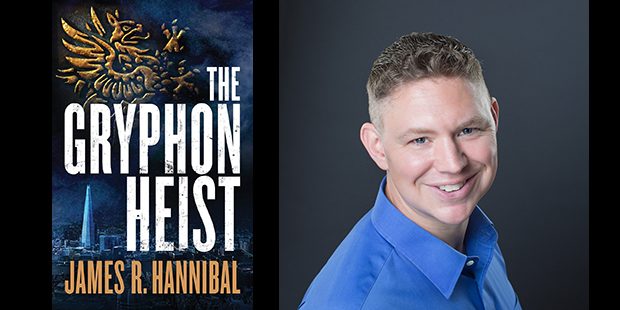 The Gryphon Heist by James R. Hannibal delves into the life of a rookie CIA operative. This first in a two-book series explores the different possibilities of where the next danger will come from.  No stranger to secrets and innovations Hannibal is able to use his vast experience as a former stealth pilot to bring realism to this story.

“What I want readers to get out of this is to create a moralistic story about espionage.  I started to realize there is not a separation from G-d and the questions of morality.  Where is the line between right and wrong? In the end, I wanted it as a story of forgiveness, to let go of anger.  There is a need to learn to forgive in the face of extreme trauma.”

The book starts out with a rookie case officer running an exercise on “The Farm.” Talia Inger gets her first posting, assigned to Transnistria, a forgotten backwaters country in Eastern Europe, part of the disputed territory in Moldova. The department handling this is known as “Other.” With her shady civilian partner, Adam Tyler, Talia takes a deep dive into a world where only criminal minds and unlikely strategies will keep the Gryphon, a high-altitude data vault, hovering in the mesosphere. She and those working with her must discover who is after Gryphon and then what will be necessary to stop them from achieving access.

“Talia was written by me as someone broken but driven.  Her mother died at childbirth and her dad died when she was seven in a questionable car accident.  She has a near perfect memory yet is able to block the accident out.  After her parents died she was placed in a ton of foster homes, but was lucky to find a good home.  Because of her past she is carrying around a lot of anger and bitterness.”

After writing the Nick Baron series Hannibal switched over to writing teen mysteries.  “For the last three years I wrote this series set in London and Europe with a “National Treasure” bent.  It might have been too thriller-esque for some of the educators out there. I decided to write this book that has just been released and the next book in rapid succession.”

Fresh from a hiatus of adult political thrillers, Hannibal has moved from writing about Nick Baron and his covert unit, the Triple Seven Chase team, to a new team headed by Talia.  Hopefully her adventures will be as riveting as Baron’s.