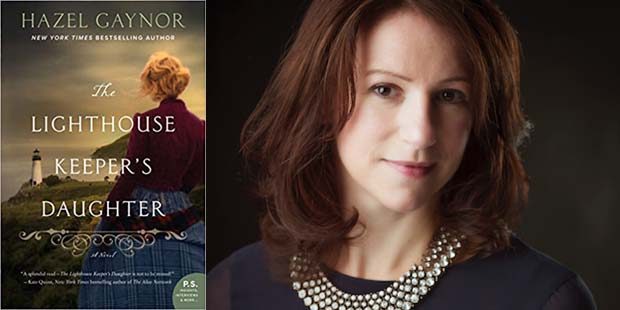 “The Lighthouse Keeper’s Daughter” by Hazel Gaynor explores relationships, some tragic and some hopeful. This historical novel, inspired by true events, is a gripping story about the extraordinary female lighthouse keepers who lived one hundred years apart.

Having visited a lighthouse, the author, “saw the island Grace lived on.

“It made me realize how remote her life was and how she lived under cramped conditions,” Gaynor said. “I also stayed at a lighthouse in Ireland with my husband and children. It is no longer a working lighthouse but has been set up for people to stay in this 200-year-old structure. It was quite the experience, having to climb 190 steps from the bottom to the bedrooms that came off a spiral staircase. There was no Wi-Fi and we were surrounded by nature, the countryside and the sea. I found it quite an emotional experience. The lighthouses in the story are strong, immovable and permanent. Bantered by the elements they try to keep people safe. As I wrote in the book, it has the company of the ‘birds and the sea, with the wild winter winds and temperate summers.’ Grace was connected to the lighthouse, having a relationship of sorts because her life was rooted in this place.”

Readers first see the real-life heroine Grace Darling, who in 1838 in Northumberland, England at the Longstone Lighthouse on the Farne Islands rescued shipwreck survivors in a furious storm along with her father. This 22-year-old woman became thrown into England’s national limelight, the subject of newspaper articles, poems, ballads and plays. At the time, it was unheard of for a woman to be involved in such a rescue. They did reach a number of survivors, eventually bringing them to safety but the memory of what they saw and experienced was forever etched in their consciousness. What came out of the fame was the renewal of the friendship that had developed between Grace and a visiting artist, George Emmerson, who captured her with his brushes and in his heart.

Because one of the characters really existed, Gaynor made sure to stick to the facts.

“I wanted to put forth how Grace was amazing, complex, clever, vibrant, brave and courageous,” the author said. “She was an earnest, devoted daughter. The duty she had with the lighthouse conflicted with the human emotions of a young woman falling in love. Being thrown into the public spotlight was something she felt very uncomfortable with. She could not handle the pressure, essentially being elevated into this Saintly woman who did save survivors including Sarah Dawson. Although I developed the artist because there are only sketchy details. George Emmerson is my fictional interpretation of that relationship. I obviously imagined how Grace and George would interact. As a novelist, I drew out the different relationships, what their life was like, and what happened. As an author, I also struggle with giving my characters a happily ever after. We do lose people in our lives and must deal with the real human experience of grief.”

Fast-forward 100 years to another lighthouse, this one in Newport, Rhode Island. Nineteen-years-old, pregnant and unmarried, Matilda Emmerson has been sent away from Ireland in disgrace. She is to stay until her baby is born, with Harriet Flaherty, a reclusive relative and assistant lighthouse keeper. Tired of sitting around Matilda finds a chest full of documents of her families past that includes a half-finished discarded portrait, which opens a window into Matilda’s family history.

“I wanted to write her as independent, rebellious and brave,” Gaynor said. “She did not follow what society expected of her and in the end knew she had to stand on her own two feet. She was a young Irish woman who came to America to find a new life for herself. Even though she lived one hundred years after Grace, she still struggled with having a say over her life. While Grace felt isolated, Matilda felt it very freeing. It is easier for her to shake off the social norms, able to make more choices than Grace.”

Although 100 years apart, both stories are one of heartache and inspiration. These three strong women are gutsy, courageous and brave.