‘The Sky Above Us’ 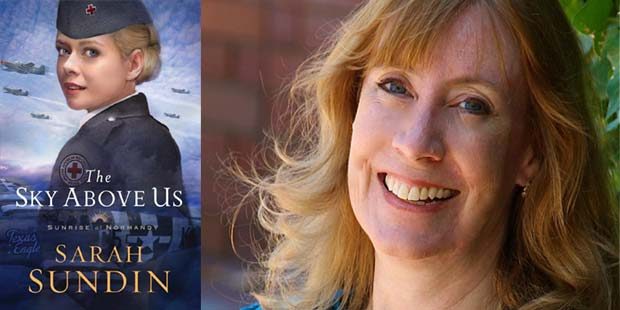 “The Sky Above Us” by Sarah Sundin is a historical romance novel focusing more on the history than the romance. Throughout this series she intertwines World War II military history with a developing relationship.

The series follows three brothers who are all fighting in Normandy. The first book highlighted Wyatt Paxton, the oldest, who joined the navy. This one is about Adler Paxton, the middle brother, who enlisted in the Air Force, and the next book will emphasize the youngest Paxton brother, Clay, who is an army Ranger.

This story highlights how Lt. Adler Paxton has been numbed by grief and harboring shameful secrets, while shipping off to England on the Queen Elizabeth to fight with the US 357th Fighter Group in 1943. After arriving he battles the German Luftwaffe in treacherous dogfights in the skies over France as the Allies struggle for control of the air before the D-day invasion. These scenes are authentic, intense, and capture the struggles of the allied forces as they have dog-fights over the skies of Normandy to protect the bombers.

On the Queen Elizabeth, he meets Violet Lindstrom who serves in the American Red Cross. Adler and Violet will reunite at the Air Base where she is assigned the duties of entertaining the troops at the Aeroclub and setting up programs for local children. As war rages and D-Day approaches, life has a way of drawing two people together.

This story is about friendship, love, and life choices. It delves into how a feeling of betrayal can lead to forgiveness and the need for people to look within to find peace and happiness.

Sarah Sundin: I have been fascinated with D-Day and wanted to write a series that will cover it from the sea, air, and ground. I thought how those in the Red Cross and the military were separated from family and friends, while living in unpleasant circumstances.

EC: Adler is a fighter pilot?

SS: He is with the 357th fighter group. I enjoyed writing the fighter pilot mentality. I read many stories by those and was able to understand what it was like when fighting on a mission. Chuck Yeager, the pilot who broke the sound barrier, was in this group. He along with his peers had a very lively and colorful memoir.

SS: I went and toured her sister ship the Queen Mary. I had an incredible tour and found out lots of history. Both these ships were troop ships. It is incredible how this massive luxurious ocean liner had 15,000 crammed on them. I had Adler and Violet sail over in November 1943. As I was doing my research I found out that the US Rangers also went over on that ship at that time. This allowed me to have Adler and his estranged brother Clay come close to seeing each other.

EC: How would you describe Adler?

SS: Rough around the edges, very driven, ambitious, and competitive. Chivalrous when he rescued Violet from this predatory type, Riggs who had no boundaries at all. Adler’s attitude is that no one should have a right to just grab a strange woman and force a kiss on her. I think Adler is two different personalities, one gregarious and outgoing, and the other where he just shuts down. Because of the tragedy he experienced he tries to keep a side of himself secret, which is a protective mechanism.

EC: How would you describe Violet?

SS: A typical good girl who was sheltered. She wants to do something big overseas so she joins the Red Cross. I think she thinks of herself as trusting, innocent, and pure. But she is also judgmental and self-righteous as she looks down on others.

EC: There was a shout out to Westerns?

SS: Both the hero and heroine loved Westerns. They read Zane Grey. My family also are Western fans. My grandfather collected Zane Grey books and enjoyed Roy Rogers and Dale Evans shows. I knew I had to put in something because Westerns were such a big part of that era’s culture. I worked Roy Rogers into the story because my grandparents were huge fans. An interesting story happened when I actually met this famous couple. My grandparents retired to Apple Valley where Rogers and Evans lived. They went to Church and played cards together. I thought it could be a fun way to add color and humor to the story.

SS: Receiving and giving forgiveness. What does forgiveness mean? Adler wants a reconciliation, but is afraid it is not possible. He grieves for how he lost the love of his family. Many times, people forgive to avoid the bitterness in our own souls.

SS: It will be out next year and follows the youngest brother Clay, who is gravely wronged by both Wyatt and Adler. As a Ranger in Tennessee he meets a librarian, Leah Jones, who is searching for her younger sister.