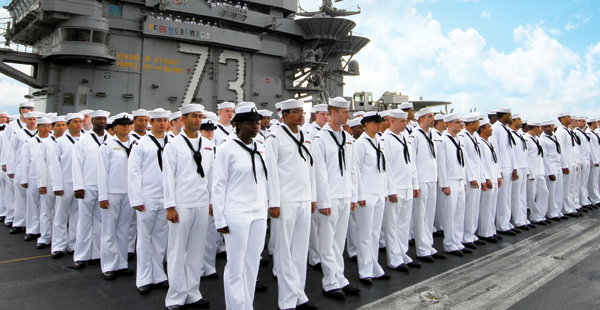 After 7 years abroad, the USS George Washington returns to the States

After serving as the U.S. Navy’s forward-deployed aircraft carrier since 2008, the USS George Washington is heading back to the States — arriving in San Diego this month. 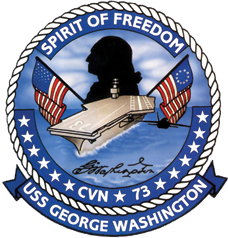 The ship’s insignia includes a classic profile of the first president, a band of 13 stars representing the original colonies and the crossed flags of freedom — all encircled by an unbroken rope representing the solidarity of the crew. The ship’s motto, “Spirit of Freedom,” was used by George Washington in a letter to a fellow patriot during the Revolution to describe the mood of the people.

The ship, and it’s crew of more than 5,000, are heading home to swap 60 percent of its crew with the USS Ronald Reagan, which will takes its place at Yokosuka Naval Base in Japan. This fall, the Washington will head to Virginia, where the ship will undergo nuclear refueling and overhaul.

Washington was the first nuclear-powered surface warship to be permanently stationed outside the U.S.

“The security environment in the Indo-Asia-Pacific requires that the U.S. Navy station the most capable ships forward,” said Capt. Timothy Kuehhas. “This posture allows the most rapid response times possible for maritime and joint forces, and brings our most capable ships with the greatest amount of striking power and operational capability to bear in the timeliest manner.”

Before making its way to California, the Washington stopped in Brisbane, Australia, to participate in operation Talisman Sabre — a joint exercise with the Australian military involving some 33,000 personnel.

Nicknamed the “Spirit of Freedom,” CVN-73 was commissioned on July 4, 1992 after 6 years of construction costing $3.5 billion. It is the fourth U.S. naval vessel to bear the name of our first president.

FA-18 fighters from its deck patrolled the skies over New York City after the Sept. 11 attacks. In 2013, the Washington was one of several U.S. vessels to provide disaster relief and humanitarian assistance in the Philippines after Typhoon Haiyan.

The turnover between the George Washington and Ronal Reagan will take 10 days, Kuehhas said.

“During this process, the crews will be trained and equipped to maintain efficiency and carry out the mission of each ship after the swap.”

The last time a hull swap took place was when the George Washington replaced the USS Kittyhawk in Septemeber 2008.

While most sailors are on board for tours of two to four years, because they arrive at different times some the George Washington’s crew have been on board a few others while others just a few months.

The ship’s refueling and complex overhaul will take three years to complete and cost $3 billion. The Pentagon hinted that it might decommission the GW, but congressional pressure kept it in service.

“The ship’s sailors have had the unique opportunity to live and work with our allies and partners in Japan, the Republic of Korea and Australia,” Capt. Timothy Kuehhas wrote on July 4. “A strong supporting cast is needed to be able to perform at the level that we do. Geoge Washington has housed some of the Navy’s finest sailors and civilians who are now scattered across the globe.”

The USS Theodore Roosevelt will replace the George Washington on San Diego Bay this fall when the GW leaves for Norfolk, Virginia.