The untold story of ‘Valley Forge’ 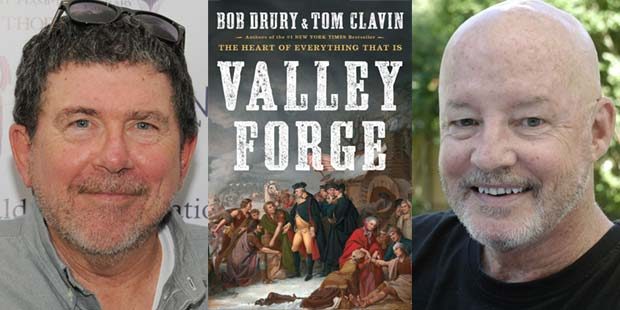 “Valley Forge” by Bob Drury and Tom Clavin allows readers to go back in time and journey with the American revolutionaries in their attempts to defeat the British. It delves into the Continental Army’s 6-month stay at Valley Forge, which enabled them to transform from undisciplined militiamen to a professional army.

The authors delve into Baron von Steuben’s ability to use the knowledge he gained on the Prussian battlefields, drilling dedication, discipline and proficiency into the Colonial army. While George Washington’s aides were fighting the British, disease, starvation and the elements, he and Alexander Hamilton were combating those in the Continental Congress. His political enemies were calling for the general to be replaced. They saw him as unqualified after the humiliating loss of Philadelphia. Yet, Washington is able to hang on, and after defeating the British at the Battle of Monmouth Court House, the momentum is never again with the Redcoats.

The authors show how Washington emerged as fallible but indispensable — succeeding in the face of so many hardships. With extensive documents, they capture the iconic characters that instilled the energy needed to defeat the British empire leading to America’s independence.

Bob Drury: I have a son who is Franco-American. Six or seven years ago, he was very upset with my wife’s brother, who made a crack about the U.S. bailing out France in the two world wars. My son shot back, “If it weren’t for Marquis de Lafayette and the French Army, you would be Canada now and there would be no United States.”

A light bulb went off in my head to write about Lafayette and the Revolutionary War, but another author wrote it first, so we concentrated on Valley Forge, from August 1777 to July 1778. I spent time with a Valley Forge historian and realized there is so much we did not know about it, including that it was the turning point of the Revolution.

EC: There are misconceptions about Valley Forge?

BD: Most Americans think of the area as freezing and that Washington dealt with the coldest winter ever. Actually, the winter in Southeastern Pennsylvania was the mildest recorded in history. Many weeks the temperature was 40 degrees. Horses did not starve to death and the harvest of 1777 was one of the largest in decades. It was the civilian farmers that wanted to sell their items to the British who paid more for cattle, sheep, oats and corn, while the Continental Army’s script was worthless.

EC: There were also black soldiers?

BD: John Laurens was determined to integrate the Continental Army with freed black men and slaves. There were 750 black soldiers who were paid the same as the white soldiers. This was the last time until the Korean War where black and white soldiers were not segregated but fought alongside each other.

EC: George Washington had to battle many enemies?

BD: It was the roughest winter of his life emotionally, physically and psychologically. He took the same risks as his troops and had to deal with the losses in New York, having Philadelphia captured, scattering those in Congress. It is amazing that he not only got through this but did so successfully.

EC: He wanted to convert the ragtag troops to a fighting force to be reckoned with?

BD: He knew he had to professionalize his army. Although he initially fought the British with speed and stealth, using guerrilla warfare, he needed a well-trained army. He also had to groom his generals and have them mature into their role, especially Pennsylvania’s Anthony Wayne, Boston’s Henry Knox and Rhode Island’s Nathaniel Greene. They basically learned on the job. He trusted them, but did not trust the colonists’ British born generals Charles Lee and Horatio Gates. Both these men were extremely jealous of Washington and were inept. As the war progressed, it showed Washington’s instincts were correct.

BD: Washington was astonished that Lee wanted to retreat during the Battle of Monmouth Court House at the sound of gunfire. Every time Lee was put in charge of something he showed his incompetence.

The 10,000 elite British troops were driving hard for a counterattack, determined to crush the colonists’ rebellion here and now. They thought the mere sight of an endless wall of British “cold steel” would send the Continental rabble fleeing in disarray. But Washington knew that having endured the mud and elements at Valley Forge he could use his presence to spur the troops to fight.

Because this was the critical juncture of the war, Washington knew he had to exude a sense of urgency and inspiration, which he did. As Lafayette said, “His presence seemed to arrest fate with a single glance.” Washington dismissed Lee and took command of the troops himself, turning the tide to a victory.

BD: He taught the troops how to march in formation. He would sleep, eat and lived with the men he drilled and drilled. He taught them how to read the terrain, use the quickstep and if retreat was necessary, it had to be orderly. He never tolerated mistakes, yet the men loved him. He instilled discipline while at Valley Forge and taught them how to become a professional army who worked together.

In May 1778 at the Battle of Crooked Billet, Simcoe ordered an attack on the Philadelphia American regiment, while they slept. Simcoe and his men wiped out nearly all of the men, by running through bayonets and then heaving the American wounded onto pyres of buckwheat straw, burning them alive. Incredibly, the British said the rules of war did not apply because they were not fighting a sovereign army, but a bunch of rebels.

BD: How our Founding Fathers sacrificed for future generations. The spirit they had is in our DNA. Washington showed that Americans have a steely backbone with a steely composure.