Thomson sums up Ferguson; hopes for shot at title 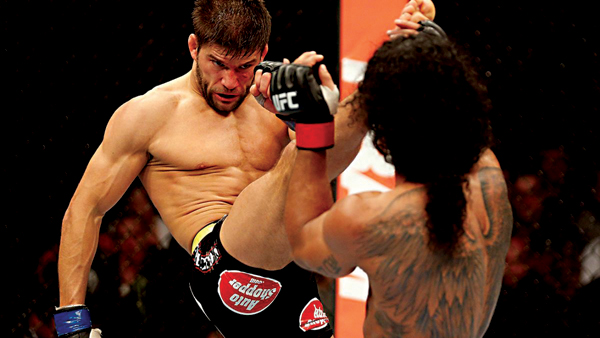 The UFC returns to Valley View Casino as former two-time UFC Heavyweight Champion Frank Mir and Todd Duffee headline UFC Fight Night 72 on July 15. One of the more intriguing bouts of the night will be in the lightweight division, as former Strikeforce Lightweight Champion Josh Thomson, currently ranked No. 7 in the UFC, battles No. 12-ranked Tony Ferguson. Hoping for another title shot, the 36-year-old Thomson was gracious enough to answer a few questions.

Art Garcia Jr.: What do you know about Tony Ferguson, and how excited are you to be fighting him?

AG: I read where Tony said you are disrespecting him by calling out higher-ranked fighters and not, in his opinion, focusing enough on your fight with him. Your thoughts?

JT: (Laughs) Anytime you have a chance or a potential opportunity where Joe Silva calls me and asks if I can make the weight to fight someone who is higher ranked, and I said, “Yes I could.” So the fact that the fight wasn’t given to me, that’s really none of Tony’s business or his concern. I couldn’t care less what Tony thinks. I mean, I was looking to fight (Donald) Cerrone, and I asked for anyone else who is ranked higher and that was it. Anybody would want to fight a higher-ranked person, especially of the fact that I never heard of Tony Ferguson himself.

AG: Tony said your stand up isn’t better than his, and that you will probably “punk out” before the fight. Do you feel he can stand up with you, and if he does, will he be making a mistake?

JT: I don’t know. I can’t answer that because I have never seen him fight.

AG: Although his record is impressive, he hasn’t fought any of the big names on the big cards that you have. How much of that “big fight” experience gives you an advantage, if it does at all?

JT: It really doesn’t mean anything. I mean, we’ve seen no-name guys come in (and win a fight), and the fact that I’ve never seen him fight poses a threat because I don’t know what he can do well. I don’t have a clue.

AG: You have had a long, successful career and fought the top names in the world of MMA. At this point of your life, do you still train the same or do you give your body a break now that you’re older and wiser?

JT: No, I still train the same, and when my body can’t train the same, then it’s pretty-much time for me to get out. I still train the same. I made a couple of little changes — not sparring hard three times a week, but I’m sparring hard twice a week doing five rounds with a different guy every round. I’m training hard with big guys because, apparently, Tony’s kind of a bigger lightweight — so obviously I’m working a lot on my grappling with some of the top Jiu-Jitsu guys on our team. It’s been good because I train with (Luke) Rockhold all the time. I train with Jackson Sousa, Leo Vieira… I train with top Jiu-Jitsu guys in the world.

Because I don’t know anything about him, anything can happen. I don’t know a thing about him, but people says he’s pretty decent on the ground and he’s a bigger lightweight — so I take a little bit of those things and train with some bigger guys and the top guys. There’s nobody in MMA who’s as good as guys like Leo Vieira, Jackson Sousa and Lucas Lynch. There’s nobody in the world as good as those guys, not in the Jiu-Jitsu world, so I’m not really thinking a whole lot about what he does well. I’m just focusing on making sure I have the right people around me to help me train.

AG: Have you ever hit someone with what you thought might be a knockout punch, only to have him laugh at you like it was nothing?

JT: No, because generally the ones where you knock someone out you don’t feel. I’ve got to say that after going back and watching the Nate Diaz fight, he took a square shin-kick to the head and he still didn’t go down, and I had to hit him two more times. So going back and watching it, that kind of shocked me and pretty much let me know that any punch I land on him wasn’t going to drop him — so it was good that the kick landed.

AG: Who has hit you the hardest?

AG: Prediction for the fight?

JT: Just a win. I’ve heard a lot about how he’s tough, kind of big for the weight and he’s got some decent grappling, I guess. So, just to win the fight — that’s pretty much my prediction.

Ringside: Having fought three classic battles with former Strikeforce Lightweight Champion Gilbert Melendez, Thomson ranked “El Nino” as probably the toughest opponent he’s faced.  “I think in the second fight, Gil was probably the toughest guy I ever fought,” Thomson said. “He came out with a game plan, and you could tell by the way his mind set was, he was focused and that was probably the toughest fight I’ve ever had.” In their first fight in 2008, Thomson won the Strikeforce Lightweight Championship by unanimous decision. In their two successive fights, Melendez took the title from Thomson by unanimous decision in 2009 and retained the belt with a split decision victory over Thomson in 2012.