New York Jets quarterback Tim Tebow, one of the most dynamic players in the National Football League and a follower of Christ known for sharing his faith openly and unabashedly, will join Dr. David Jeremiah, the senior pastor of Shadow Mountain Community Church, for a very special event Father’s Day morning at Qualcomm Stadium in San Diego, the church has announced.

“Father’s Day 2012 – Encouraging Men To Live, Love & Lead” presented by Shadow Mountain Community Church is scheduled to kick off at 10:00 a.m. on Sunday, June 17. Tebow, who is known as much for his late-game heroics as his open professions of his Christian faith, will share his story and encourage men young and old to live their lives in faith, love those around them and lead courageously.

“As a football player, Tim Tebow is the real deal, a gifted athlete who is capable of taking over a game at any moment,” said Dr. Jeremiah. “But far more importantly, at the age of 24 he is also the kind of man any young boy would do well to emulate. Tim recognizes that the real game changer is Jesus Christ, and he passionately lives out his faith every day, both publically and privately. Tim gives Christ the glory and honor at every turn and he embraces the label ‘role model’ in this time when most athletes shun the title.”

Worship will be provided by nationally renowned Christian recording artist Charles Billingsley, and ESPN Senior NFL Analyst Chris Mortensen is also expected to be in attendance.

In just two years, Tebow has established himself as one of the most high-impact players in the National Football League. Before being traded to the Jets earlier this year, he spent his first two NFL seasons with the Denver Broncos, starting the final three games of his rookie season in 2010 and the last 11 of the 2011 season. After taking over the team in week six, he led the Broncos to five dramatic come-from behind victories, including three in overtime, and their first playoff appearance since 2005.

Prior to his selection in the first round of the 2010 NFL draft by the Denver Broncos , Tebow was a standout quarterback at the University of Florida, where he led the Gators to two national championships (2006 and 2008), became the only sophomore and the only homeschooler to win the Heisman Trophy (2007), and received the James E. Sullivan Award as the nation’s most outstanding amateur athlete in any sport.

The event is free, including parking, and open to the public. The Qualcomm Stadium parking lot and stadium gates open at 8:00 a.m. and individuals and small groups are encouraged to tailgate prior to and after the event. 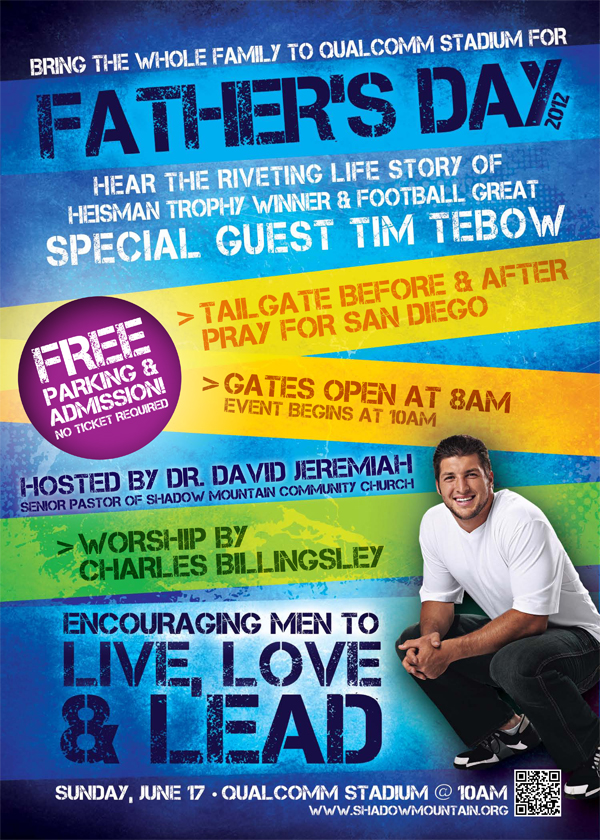 For more information visit the Shadow Mountain Community Church Web site at www.shadowmountain.org or call the church’s event hotline at 619.590.2100.