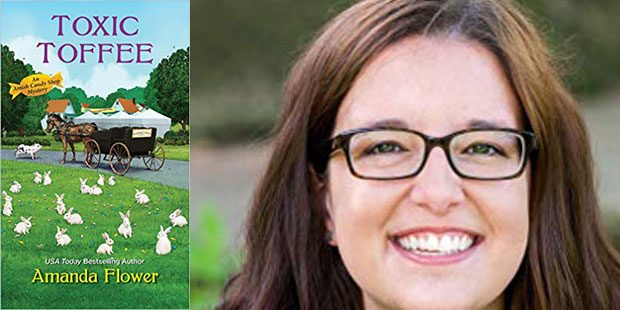 “Toxic Toffee” by Amanda Flower is a delightful cozy mystery that will put a smile on readers’ faces while they try to solve the who done it mystery. As with all the books in the series, murder seems to find Bailey and she enjoys her role as an amateur sleuth along with her “hot” boyfriend Deputy Sheriff Aiden Brody.

“I want to continue doing this. In this case, I explore the family relationship when someone tries to leave the Amish community. Those who leave the faith are regarded in different ways: some are not shunned because they were never baptized, some are not shunned because the community is more lenient and open, and some are completely cut off from their parents and siblings,” Flower said. “What I put in the book is true, that there are people and organizations that help the Amish who leave integrate into the English world. Yet, around 70% of the people born into the Amish faith remain, primarily because they do not want to lose access to their family and friends.”

Yet, death becomes the main attraction when Stephen Raber, a jovial Santa Claus look alike rabbit farmer, keels over from an apparent heart attack right in front of Bailey. Except he didn’t die from natural causes, but from a lethal dose of Lily of the Valley flower mixed into a tasty piece of toffee he had eaten. Now Bailey has become a foster parent to one of Raber’s rabbits, Puff, a large fluffy white delightful bunny. Because the Amish distrust the local law enforcement, Bailey assists her sheriff deputy boyfriend in the investigation. In addition to searching for a killer, Bailey’s been recruited to create a giant 7-foot toffee rabbit. Splitting her time between taking care of Puff, creating the large rabbit, and solving the murder where she and Aiden try to uncover a twenty-year-old secret.

The quirky characters are colorful and fun to read. Flowers skillfully blends Amish and English characters with a mystery that keeps the reader sleuthing along with Bailey. Prepare for a few smiles as Jethro the pig and Nutmeg the cat are back, as they are joined with Puff the bunny.