This one-day competition showcased ten surfers from each country battling it out in a head-to-head surf competition in the restricted waters of Del Mar Jetty at Camp Pendelton. The battle lasted for 4 hours as 1,000 spectators cheered on their respective country.

The surfers competed using a modified version of the National Surf Leagues Game format which works like a four-inning baseball game. One team from the East Coast surfed in the top half of the inning and the West Coast surfed in the bottom-half of the inning, which was determined by a coin toss. With four to five surfers participating in each inning, the total inning score consisted of each surfer’s highest scoring wave. Instead of a traditional prize purse, the teams competed for each other’s surfboards used in the competition (similar to racing for pink slips) as well as ultimate bragging rights.

The British Army Surf Team started off the contest strong in the first quarter by utilizing great strategy to maximize the wave sets but the U.S. Team answered back in the 2nd quarter by bringing out their “Dream Team.” U.S. Coast Guard 2nd Class Petty Officer, Kristopher Grimm, obtained the wave of the day with a perfect score of 10 to bring his team to the lead.

In the 3rd quarter there was a shift in tides and the British Army Surf Team was unable to get in position for any high scoring waves. The U.S. was able to solidify their win in the 4th by gaining some big scores as the British Army fell further behind. In the end, the U.S. Military Surf Team took the win ending the competition with final team scores of 94.5 and the UK with 81.

“After the second quarter, the U.S. Military Surf Team just got into a rhythm and started surfing better as the game went on,” said Shaun Burrell, Executive Director of the National Surf League who ran the judging at the contest on Saturday. “They really seemed to come together as a team which ultimately is what won it for them in the end.”

Although this was the 4th year of the competition, it was the first international contest. 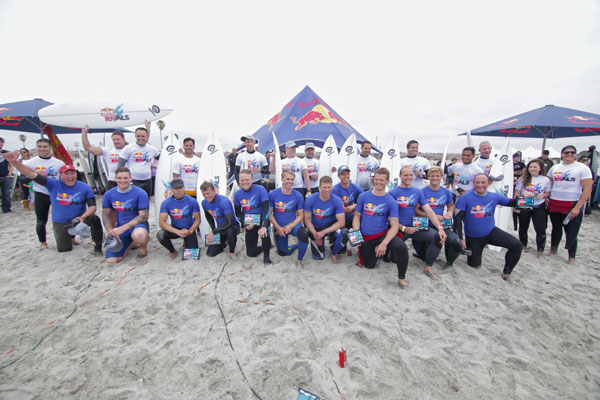 “We usually have a West Coast versus East Coast Competition,” said Theresa Flores, Sports Coordinator aboard MCB Camp Pendleton, “but this year we decided to make it international as a way to get both countries together since they’re allies and serve alongside each other. It was also a great way to honor Memorial Day and give back to the troops.”