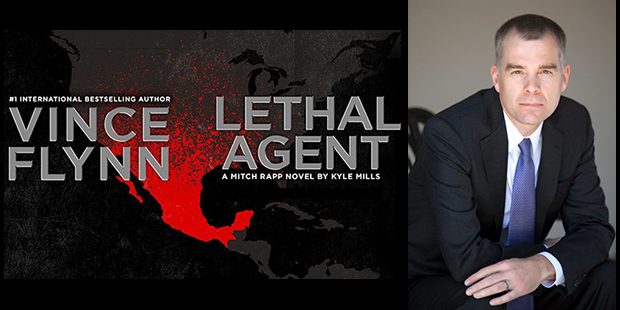 Vince Flynn’s Lethal Agent by Kyle Mills harkens back to earlier Mitch Rapp books. Although fans miss Vince Flynn, having Mills continue the Mitch Rapp series has made the passing much easier as his writing style does not stray very far. This story is classic Mitch Rapp, putting him in a hostile environment, having to face off against the Islamic terrorists and corrupt Washington politicians, along with those who have no loyalty, no gratitude, and no courage to defend the CIA as others try to throw them under the bus.

The only part where this story has differentiated from the earlier Vince Flynn novels is the lack of team work, comraderie, and banter.  Irene Kennedy is seen as acquiescing to the politicians and not really involved in the plan to take down the terrorists. Because President Alexander’s term is almost over, and he appears to have little appetite for confronting Rapp’s enemies. Caught up in the web is Kennedy, head of the CIA, Rapp’s onetime boss, and longtime protector. Mitch has to work mainly solo to stop a terrorist attack, since he is disavowed by the entire Washington establishment and Irene Kennedy has been rendered largely ineffective.

As the incumbent president is finishing up his eight years in office, he has surrendered to the strong female senator (from the other party) who is bound to win the next election. Politics now seem to be more about power than serving the public. A quote reflects this, “There had probably been a time when politicians achieved this level of success because of patriotism or a deep sense of responsibility to their countrymen.  But now it was just about power.”

The villainous politician is Senator Christine Barnett, the frontrunner for the upcoming presidential election, and someone who is no fan of the CIA. Dr. Irene Kennedy knows that her time as director is coming to a close if Barnett wins the Oval Office. Barnett is now exploiting the terrorist tactics of Mullah Sayid Halabi to make the CIA and the Alexander administration appear incompetent. Halabi plans an attack he believes no one would anticipate, weaponizing anthrax, then slipping it through the Mexican border with the help of the drug cartels, and targeting politicians who support Middle East intervention. He will follow up with a new disease called YARS, similar to the Spanish Flu, that will kill Westerners by the tens of millions and spark “a pandemic that would fundamentally change human existence for generations.” To stop the terrorist threat Mitch infiltrates the Mexican cartel, having them believe he has gone rogue.  It is up to Rapp to stop this biological threat or mankind will be devastated.

With a bioterror threat, and terrorist chatter on the uptake, Mitch Rapp is the hero America needs, and thanks to Kyle Mills he is here to stay as he protects Americans.

Elise Cooper: Why the bioterrorist threat?

Kyle Mills: I guess I am a science geek.  I wanted to write about a bioterrorist threat that will also involve border security, which is in the news and hard to ignore.  I think many people are thinking a lot about this.

EC:  Did you intentionally want to write a “classic” Mitch Rapp Story?

KM:  Yes.  Combining the terrorists with the evil politician is a theme throughout Vince Flynn’s novels. I think this was a throwback to earlier books. I also think politics has become theatre, where it is divorced from public policy.  Politicians look at the world as a stage they play on. They do not want to solve problems because they can use it as a talking point to get elected. It is hard to get a realistic in-depth discussion anymore.

EC:  It seems that Irene and company only made cameo appearances in this story?

KM:  Mitch Rapp was very much front and center.  The other characters were moved to the background and there was less interplay between them.  There was one spotlight and it was on Mitch because he was undercover and completely cut off from communication.

KM:  Irene’s concern was to protect Mitch’s position.  She was very much on her own to try to keep Mitch’s cover.  I think she played it in a clever way as she acquiesced to the politician.  There could be no inkling that what happened to Mitch was not real. She took the heat off of Mitch.  To me, this is exactly what Irene does.  She is very pleasant to someone’s face and very reasonable. Then in the end there is the realization that Irene has won, and the politician has lost.

EC: How would you describe Senator Barnett?

EC:  How would you compare the Islamic terrorist versus the drug cartel head?

KM: Both are violent. The cartel enabled the terrorists when they combined forces. I think they have different motivations.  The terrorist is motivated by ideology, while the cartel by power and money. I had this quote that I hope gave people a chuckle, “I think you’d find working for drug traffickers much more predictable than working for politicians.” What I wanted to show is that politicians are self-serving and will do what they think is needed to get them elected.

EC:  You have some Spanish in this novel.  Did you learn in while in Spain?

KM: While I was in Spain, I asked someone from Mexico, a neighbor, who became a friend because the Spanish in the book is different than how they speak in Spain.

EC:  Would you ever write your own novel?

KM:  I can only write one decent book a year.  I enjoy writing the Mitch Rapp stories and I want to put all my efforts on concentrating on that.

EC:  Can you give a shout out about the next book?

KM: The ensemble cast will be in it more.  The plot has a successful terrorist attack on US soil and Irene, Mitch, Scott, and Claudia must deal with the aftermath.