‘What Doesn’t Kill Her’ 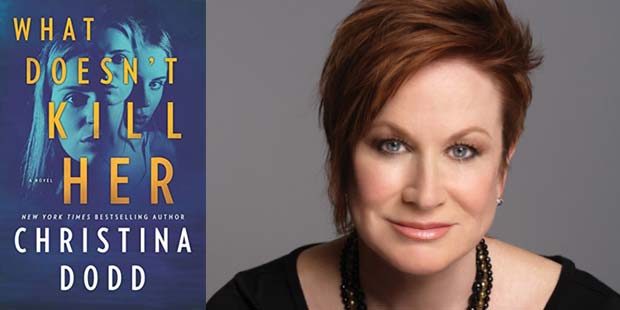 “What Doesn’t Kill Her” by Christina Dodd brings back the fabulous characters of Cape Charade. Dodd has outdone herself by creating this character driven story. The previous book presented the heroine Kellen Adams as a victim, survivor and warrior. But in this novel, readers see another aspect of her — as a mom. People will take a journey with Kellen as she grows emotionally, while overcoming the trials and tribulations of having a seven-year-old daughter.

In the last book readers learn that Kellen escaped an abusive husband. Unfortunately, she could not escape his family and was shot in the head where she lied in a coma for thirteen months. Running away, she took her cousin’s identity, and joined the military, rising to the ranks of Captain. After getting a medical discharge she found a job at a Di Luca resort. While there she was reunited with Max Di Luca, her former boyfriend and unbeknownst to her, the father of her child, Rae.

Kellen undergoes a transition from being frail to being tough. Dodd noted, “I wanted to write her as someone strong, determined, and brave. The year of unconsciousness had her go from Cecilia who needed someone to protect her to Kellen, a self-sufficient person. In future books this character will have to come to grips with the split personality. In the beginning she was weak, but now she is able to take control over her life.”

Realistically, Dodd shows that not all women are suited to motherhood and the bond does not necessarily happen instantaneously. Wanting time to deal with all the new reality Kellen takes a side job to deliver an archeological piece to a recluse in the wilderness. Things do not go as planned because two teams of men are out to kill, one wanting revenge, and the other wanting the antique head. While being ambushed Kellen realizes that her daughter Rae has been hiding, wanting to bond with her mother. To escape the killers, both are running for their lives through the wilderness. During these scenes, it becomes obvious the two are becoming close.

“I based Rae on my two daughters. They had an extraordinary vocabulary, possibly because they are the children of an author. Rae is antsy, a typical seven-year-old. She is a chatterbox, very literal, curious, has a good imagination, and like her mother is a fighter. In the next book, she will be ten years old and a handful as she undergoes personality changes.”

The banter between mother and daughter is at times hilariously funny as they journey through this adventure together. This dialogue between Rae and Kellen stole the story. Rae is a chatterbox, an intelligent and sassy girl. She looks on her mom as a Superhero, and she is the sidekick, naming them ThunderFlash and LightningBug. Dodd portrays Rae as an innocent child who is still at the age where she feels her parents can do no wrong and looks up to them. Knowing her mom is a badass, she wants to emulate her and does so with the Superhero hidden identities. At the end of the book, Kellen described her daughter, “She’ll grow up to be a woman who allows no man to hurt her, to abuse her, verbally or physically. She’s going to be strong. She’s got my back and I’ve got hers.”

Readers will have a smile on their face throughout this story. Although there are intense scenes, the humor makes for a wonderful release.