When Reno was king 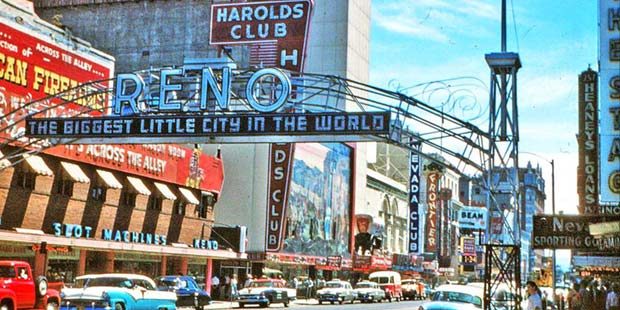 Although the Gold Rush first brought prospectors to California looking to make their fortunes, the Reno area exploded with the discovery of silver at the Comstock Lode. Then came the entrepreneurs (think Levi’s blue jeans), prostitutes and shady characters. Illegal gambling parlors sprung up — it was truly the Wild West. By the 1920s, Reno was referred to as Sodom and Gomorra. Bankers laundered money for Baby Face Nelson, Ma Barker’s gang, Alvin Karpis and Pretty Boy Floyd.

All forms of gambling were legalized in Nevada in 1931. The Smith family, owners of Harold’s Club, soon realized that the golden goose was luring people from California to visit their casino in Reno. The Smiths were pioneers in terms of advertising, including roadside billboards and promotions. Their marketing efforts heralded a new chapter in gaming. “The Biggest Little City In the World” became the destination for gambling.

Things began to change due to the construction of the Hoover Dam, 1931-1936. It was then that Las Vegas became more than a way station in the desert. By the mid-1940s, thanks to the foresight of mobster Bugsy Siegal, Reno’s reign began to diminish and Las Vegas’ ascendance began.