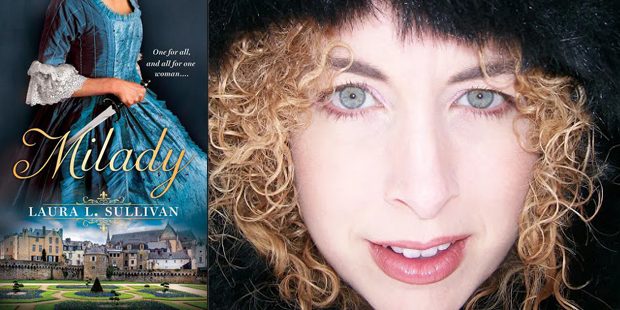 Milady by Laura L. Sullivan is the untold story of Milady De Winter.  Anyone familiar with The Three Musketeers will know her story written by Alexandre Dumas, and if not, they can take a journey with this adventurous woman. This is a must read about a strong heroine that overcame life’s challenges against incredible odds. This action-packed story has espionage, murder, and betrayal with a touch of romance and some historical background.

“I had first read The Three Musketeers superficially as a teenager when I was about fifteen.  After this new translation came out a few years ago I read it again.  I was shocked at some of the things I missed while reading it as a teenager including the rape by deception of Milady – by the supposed hero no less!  I started to study her character some more and realized she is not a bad person at all. The Dumas novel had her devious, treacherous, and heartless.  I saw her more as an intelligent and practical civil servant.  She was a spy for France who worked for Cardinal Richelieu, the defacto leader of France.  Getting into her backstory I found that she was constantly betrayed and made to look as a bad person, which was not the case.”

Early in the story, Milady formerly known as Clarice is taken to King James’ Court by her father who hopes her beauty will gain favor with the King. This starts a sequence of events that cannot be undone turning her into a spy and assassin for Cardinal Richelieu.

Milady is not seen as the villainous, cold, and unyielding murderess/seductress character portrayed by Dumas. Sullivan has written her as a refreshing, no-nonsense, witty character who has an unapologetic attitude. She uses her beauty and intelligence to accomplish her goals, causing havoc to those men who come up against her including The Three Musketeers. But there is also a softer side to her where loyalty and duty stand out.

Olivier, the Vicomte de la Fere aka Athos is a  typical nobleman who considers himself a powerful master of his land and the peasants under him.  In the original The Three Musketeers, he claims that he could have had Milady at any time, basically raping her.  The reason given, he was the lord of the manor.  He definitely has a high opinion of himself.  His character can be described as proud, hasty, unthinking, tied to the aristocratic standard, with an underlying coldness. He and Milady both had an idealized version of each other.  The second she did not conform to his standards he changed his attitude toward her.  I think she was duped by his character. He wanted to kill her because she insulted his honor by marrying him even though she had a supposed past.”

This novel is a marvelous compelling tale of love, loss, betrayal, and retribution as Milady forged her own path from the one that was forced upon her. Sullivan writes her as a very sympathetic character where readers feel her distress, anger, and love. The only thing that can make this better would be to have this book the first in a series featuring this female heroine adventurous spy.