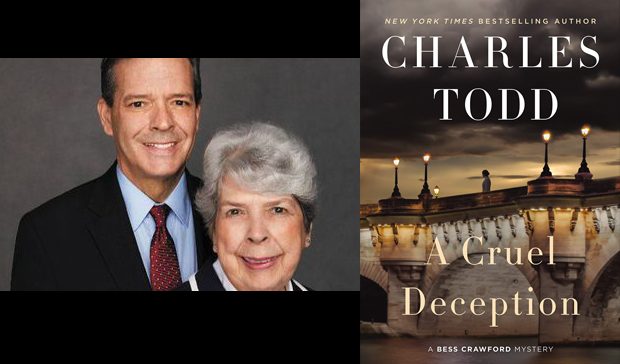 A Cruel Deception by Charles Todd brings back Bess Crawford in a riveting mystery.  As always tidbits of the historical context of the war allows readers to feel as if they were transported in time to another place and era.

We wrote this quote about President Wilson to show how “Wilson was an idealist who wanted to end all wars and believed in self-determination.  In theory, it had a lot of merit, but in practicality did not address what happened on the ground.  He wanted self-determination where every little country that wanted could have its independence. He had the American viewpoint that all these colonies could be created as a new country in the image of the US. It just doesn’t work that way. Look at today with Syria, Iraq, Turkey, and the Kurds. We sadly do not learn from the past.  We seem to think in terms of what works for us and do not have an understanding of the tribal systems.”

As Bess is pondering her future at wars end, she is asked by her Matron to travel to France to find out what has happened to her son Lawrence Minton. He is a WWI veteran who is supposed to be sitting in on the Paris peace talks but seems to have gone missing. After tracking Lawrence down in a small village, Bess discovers he’s addicted to laudanum and plagued by guilt. During one of his sleepwalking episodes, Lawrence cries out not to be judged, because he “tried.” Realizing he is taking the drug to escape his crippling sense of guilt over the wartime trauma, Bess must find out what happened and why someone is trying to murder him. She has an uphill battle because Lawrence is heavily addicted to the opiate laudanum, bitter to the young woman who is trying to help him, and refuses to communicate with her. To make matters worse, he can’t confide in Bess, because the truth is so deeply buried in his mind that he can only relive it in nightmares.

Lawrence is a character that we wanted to show was “Broken and someone who could not find himself.  He struggled and is haunted by what happened to him. He is not thinking of the other person who is trying to help.  At the end of the book we wanted to make him face the truth.  This self-destruction was his form of shell-shock, with the feeling he deserved to be miserable. We also wanted to show how the drug could be turned into a murder weapon. A few drops could be prescribed, but someone could put in more drops and suddenly the person dies.”

The cast of characters has varied from many of the books.  Simon Brandon was a young soldier who served under Bess’s father, Colonel, Richard Crawford, rising through the ranks to become Regimental Sergeant-Major. He now serves as the Colonel’s assistant, but also became a companion to Bess as he taught her to ride, to shoot, and later to drive a motorcar. It is Simon to whom Bess turns when she can’t talk to her parents and needs someone to assistant her in solving the mystery. Yet, in this book Simon is barely mentioned. Instead, Bess turns to help from her father, Colonel Sahib as he is known, and to a new character introduced in this novel, Captain Clifford Jackson.

“It is a subtext throughout the story, ‘where is Simon.’ We deliberately did it because we are going to have him do something in the next book, and we did not want Simon to always save the day. Even though Simon is not on the printed page, Bess is always wondering about him. Also in the next book will be the character Captain Jackson, a pilot who was part of the Lafayette Escardrille, a unit of largely American volunteer pilots flying for France and under French command. He is from Albuquerque who had an unsophisticated sense of logic that could not be argued with. He is kind, caring, and gallant, a typical Westerner. The Captain took Bess under his wing as his protector. A cowboy who was like Sergeant York. ”

This story will tear at the reader’s heartstrings. By the end of the book they will be emotionally drained as they experience what Bess is going through from anger to compassion to fear for her and Lawrence’s safety.