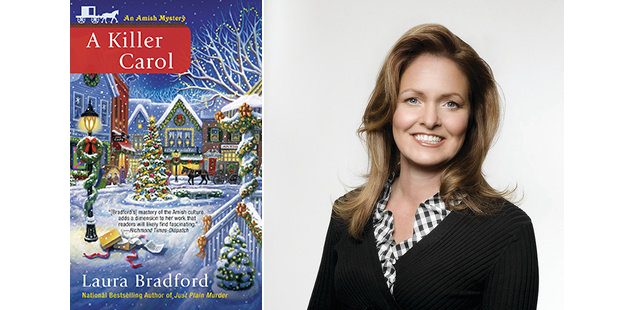 A Killer Carol by Laura Bradford expertly combines a good mystery within the Amish community.  In this novel, she is able to highlight the suspense with a secondary story about Christmas preparations and festivities.

Bradford decided to write the series because she wanted to “have an interesting backdrop for a mystery.  They live in the 1800s with no cell phones in their houses, do not keep large amounts of money in their house, will not take photographs, will not have Christmas trees, and are wary of the police. In some ways, it is like writing an older time mystery surrounded by the modern world.  For this particular novel, I enjoyed involving the whole town in the crime.”

The heroine, Claire Weatherly, lives in Heavenly PA, where her preparation is shattered when an elderly Amish couple is found murdered in their own home. Claire’s boyfriend, Jakob, who left the Amish to become a policeman, is charged with figuring out who did it. It appears all of Claire’s Amish friends are being considered suspects and people of interest. She wants to believe that those close to her are innocent, but lies and betrayals shatter that trust.

The author noted, “Because Jakob left the community after he was baptized, he was excommunicated.  Now, no one can speak to him including his family. In the books, Jakob’s niece and nephew will visit with him on the QT. They are taking a risk because if they are caught, they also can be excommunicated.  Because of this Jakob allows Claire to be the go between himself and the community.”

Readers will enjoy how Bradford skillfully captures the holiday atmosphere, independent of the mystery. There are gentle contrasts between Claire’s approach to Christmas and the simpler Amish traditions. The author meshes the two worlds perfectly. Readers can shut their eyes and feel transported to Heavenly with snow outside, festive decorations all around, display lights, and Christmas music often playing.

“I wrote Christmas as a subplot with the festival.  It was fun balancing the Christmas and the crime itself that does not really have anything to do with the holiday.  I think people need to remember evil does not take a holiday.”

Another piece of the plot is the turn the relationship has taken between Claire and Jakob. She feels Jakob is being secretive, and she is not sure if their relationship can survive.  Because he seems to be hiding something, Claire feels betrayed. She starts to have her doubts and begins to wonder if she can trust Jakob anymore.

“I wanted to write Jakob and Claire as a couple that respects each other.  Claire has learned patience and forgiveness from Jakob.  He has learned from her what to do when they care for someone. They have a true and steadfast love that faces some bumps in this story.”

The plot has likeable complex characters. By presenting many different suspects the author allows readers to take the clues given and play detective. Anyone who has read this series will look forward to the next book in the series.