All Out War by Sean Parnell 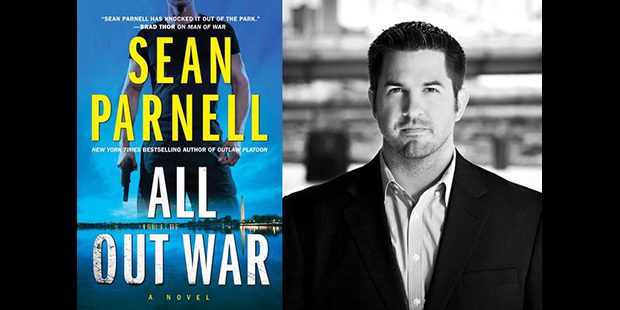 All Out War by Sean Parnell is a thrilling read.  There is non-stop action that takes readers on a roller coaster ride.  With his vast personal experience, Parnell is able to bring some realism to the story.

Having served in the Army’s Infantry Unit in Afghanistan, Parnell is able to create a true heroic warrior.  He retired from service as a highly decorated Captain, receiving 2 Bronze Stars (one for valor), and the Purple Heart. His fictional hero, Eric Steele is also someone readers can relate to.  In this second in the series, Steele has just returned to his Alpha unit after recuperating from an injury. An Alpha is an elite Clandestine operative assigned to a unit known simply as ‘The Program.” Its purpose is to give the United States President another option.

This plot begins with Steele being attacked while having his mother over for dinner. Utilizing some formidable skills, a small arsenal of weapons and his state-of-the-art security system, Steele fought back and even manages to get away in his Pontiac GTO. Unfortunately, his adversary ambushes him, putting Steele and his mother in the hospital. Although his mother is in a medically induced coma, he is able to recover quickly with some experimental treatment. Vowing to find the person or persons who initiated this attack, he soon realizes that this is more than a personal vendetta.  There are international implications that will put the world on the brink of war.

With the help of his girlfriend, Meg Harden, Steele finds out who attacked his mother, the same person behind the devious plan. It is a terrorist known as Zakayev, who just escaped from a Russian maximum-security prison. After breaking his friend out of a black site, he plans on joining forces with Hassan Sitta, a man who’s shown his prowess and ingenuity with bomb making.

Full of action and adventure this plot involves international intrigue. Readers will enjoy taking a journey with Eric Steele, a very likeable hero.

Elise Cooper: There are a lot of action scenes. How do you conjure them up?

Sean Parnell: I usually start by planning 4 or 5 badass scenes.  After that I think of the theme and a moral question.  In coming up with a theme I refer back to my service.  What is on Eric Steele’s mind, is the mission worth it? I think this is a question every soldier who has put on a uniform, regardless of the generation, has asked themselves.

EC:  What about the moral question?

SP:  Is Steele a man or a servant? Both Eric and the villain have asked themselves this question.  Are both servants of their country, bound to a higher power, or do they have a choice in the matter?  Steele sometimes feels like a pawn that is asked to kill the king.  By the end of the book he discovers he is someone who has chosen to serve. He realizes he wants to serve in something greater than himself and that the US ideals are worth defending.

EC:  In the story, black sites are brought back as a tool to house terrorists?

SP: I think they are a great combat multiplier and allowed us to take the war to the enemy. For the plot, I thought that just maybe these sites were not obsolete. I made one on this nuclear icebreaker in the North Pole, basically hiding in plain sight. I gave it the name Cold Storage. I came up with the name from my military days when we would put the equipment not being used in storage.  The terrorists on this ship are even more dangerous than the ones left in Guantanamo Bay.

EC:  In this book you gave a shout out to the US military?

SP:  Those of us who have served always strove to protect those who cannot protect themselves.  The US military is the greatest force to help the preservation of life.  When I was in Afghanistan in 2006 the mission was to destroy the enemy.  But a close secondary mission was to take care of the people. We built walls, schools, and gave humanitarian assistance.  We took both missions very seriously.

EC:  Why the domestic violence scene?

SP:  It came very early on in the book.  I wanted to show how Eric Steele grapples with the feeling that he cannot save everyone.  He realizes there are times he must back off.  This happened to many in Afghanistan.  For instance, suppose a little girl comes up to a US soldier holding a hand grenade.  Did she bring it to detonate or was she returning it after finding it? Sometimes there is a no-win situation.

EC:  Through Meg you show how the family feels?

SP:  Men and women deploy but so do their family members that include husbands, wives, parents, and those in an intimate relationship.  They bear the emotional scars.

SP: Her profession is based on a real Army unit that exploits intelligence for tier 1 assets. She is recruited by “The Program” to work with “Keyhole.” This is based on a real national security platform that uses voice and facial recognition.  In the book, it is like the NSA platform on steroids.

EC:  You gave a shout out to James Bond in the book, are you a fan?

SP:  I am a huge fan.  My mom loved Sean Connery.  When she got pregnant with me she wanted to name me after him.  My dad said “absolutely not. My first-born son is not being named after a star of a spy movie.” They decided my first name to be Richard, and my middle name to be Sean.  But I am called Sean, not Richard.

EC:  In the books, you kill the peers of Eric Steele?

SP:  I did this so Americans understand what American warriors go through after losing someone they love.  I have lost thirty of my friends since I have been back from Afghanistan.  Every single time it hurts.  I also want people to know that it is real life and death out there every day, not like in a video game.

SP:  It will be Eric Steele’s third book.  The last scene in this book sets up the next one.  He has some trust issues because there is found to be a traitor in “The Program.”